Why Universal Yums Is My Go-to Gift for Adventurous Kids Growing up, I was an open-minded eater, but my little brother wasn’t. My mother still talks about how he would eat only three things: dry pasta (no butter, oil, or sauce, thank you very much), condiment-free hamburgers, and chicken nuggets (if they were chicken tenders, he wasn’t interested). She tried forcing him to sit at the table for hours until he’d eat his dinner, came up with rewards systems that would incentivize him to try new things, and— I can only assume— fretted away that he would grow up to be a malnourished weirdo who would never be invited to dinner parties. Image from our review.

Thankfully, like most kids, he eventually grew out of the picky eating phase, but the funny thing is that he’s now one of the most adventurous adults I know. He lives on the other side of the world, has climbed Mt. Kilimanjaro, and even keeps his dear old sis up to speed on new food trends he comes across. Looking back, I think his adventurous spirit was always there, even when it came to food (I can vividly remember digging through our Halloween candy hauls, each of us biting into unfamiliar treats to see which ones were worth hoarding!). I sometimes wonder if my parents could have broken him out of his eating comfort zone sooner with a different approach.

Now that I’m an adult, I’ve experienced picky eating from the other side of the proverbial table. I don’t have kids myself, but many of my friends do, and a few of them are experiencing the same dinnertime headaches my own parents faced. Their kids have fallen into picky eating ruts that they’re hesitant to break out of.

I’m always on the hunt for gifts for birthdays, holidays, and special occasions that will help me stand out as the “cool auntie,” and as someone who LOVES food, I try to seek out presents that will help spark the same passion in the bellies of my favorite little ones— even those that have a complicated relationship with food exploration. There’s one gift that has won me more success (and brownie points) than any other: Universal Yums.

Let’s take a quick look at what this subscription is all about: 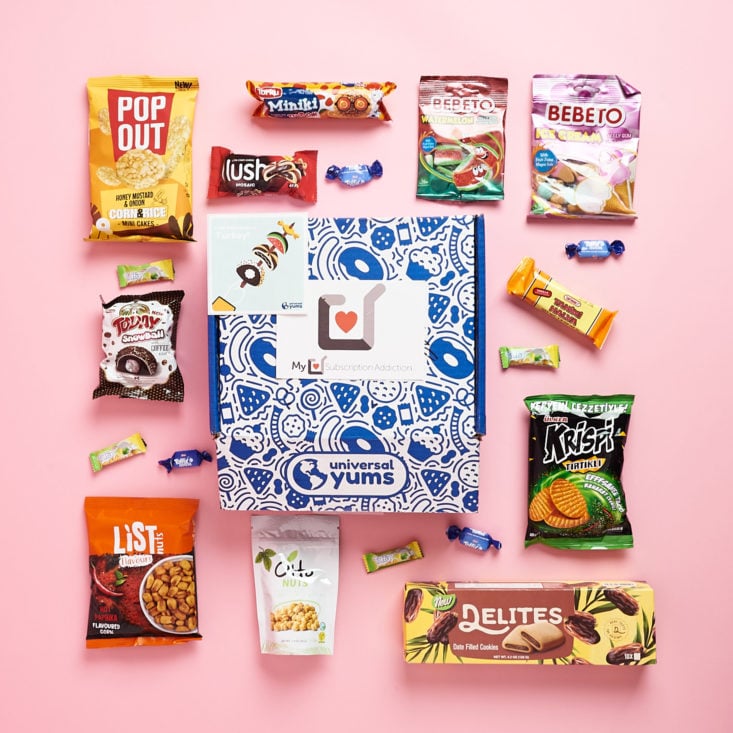 Image from our review.

Every month, Universal Yums packs up a box full of treats from a new country. Each shipment is different, but most boxes contain a mix of salty crunchy snacks, cookies, and candy. Flavors and products vary from month to month depending on the featured destination, and eating your way through each box is like taking a culinary vacation without leaving your living room.

I love opening up Universal Yums boxes with my fave kiddos and reading them a little bit about each country’s culture and geography before trying all of the different snacks together. The majority of the treats are extremely kid-friendly, but one of my favorite things about Universal Yums is that they encourage you to turn the tasting experience into a game.

Subscribers are actually encouraged to vote on the best, weirdest, and worst snacks in each box. And it’s true, some of the treats are a little weird, and the flavors are occasionally divisive. For example, you’ll likely find licorice in boxes from Scandinavian countries, seaweed and fishy snacks from places like Japan, and lots of coconut and pineapple treats from the tropical climes. But if you’ve ever seen kids ripping through a packet of Bean Boozled Jelly Beans, you probably know there’s a sick sense of joy that can come with sampling things that are “out there.” (For the record, I’ll take licorice and seaweed over booger-flavored jelly beans any day.)

Universal Yums gets it: kids don’t have to love everything, but it’s great if they’re willing to try something new.

For several years now, Universal Yums has been my go-to gift for adventurous children, and it’s been a pretty big hit so far. When I can’t be there to explore the boxes alongside the wee ones, I get reports from my friends that their kids think the boxes are a hoot. They love learning about the world through food, and family discussions about which treats are the best can get rowdy.

Maybe they won’t all end up like my brother when they grow up— traveling the world and jetting off to climb foreign peaks— but I like to think they’ll be excited to pull up a seat at my table and join me in enjoying cuisines from all over the world. It’s my hope that Universal Yums is inspiring curiosity about other cultures that will stick with them as they get older.

Do you have kids that are fans of Universal Yums? Let us know in the comments!

Universal Yums is a monthly snack subscription box that delivers a variety of international snacks from all around the world. Each delivery brings an unforgettable experience that mixes the fun of food, travel, and learning in one tasty box!

You won’t have to worry about forgetting your ... read more.
Spoilers
Deals
Reviews
Read customer reviews >Write Your Own Review

I agree with Mary K. This is the one sub I’ve kept even as I’ve cancelled many others. Everyone in my family loves the box, and it generates a lot of good conversation as we all sit down together to sample the treats each month.

Gifting this to picky kids is a great idea. I love Universal Yums so much, it’s the only subscription I still get (after once having had 30 or so!). Even when I bite into something I don’t like, I’m glad to have had the opportunity to try it and learn a little bit about the country. I love the cute little info booklet that comes with it. You can tell this sub is a labor of love and not just a way to make a few bucks (at least that’s what I think). The Best Razor Subscriptions for Smooth Shaving in 2021 By Lindsey Morse  |
Jun 23, 2021  |  14 comments
Our reviewers research, test, and recommend the best subscriptions and products independently; click to learn more about our editorial guidelines. We may receive commissions on purchases made through links on our site.