ACTIVE DEAL: Save 10% off your first month
CODE: COMICADDICTION10

Good To Know: They also just launched a Kids version! So if you want to get your kids into comics without worrying about getting bloody titles - it's perfect for you! We'll have our first review of this soon! All comics are bagged and boarded and then kept inside another plastic bag. So the packaging is great, and we have yet to have any bent or damaged comics. This month was a special month - we received 3 signed copies! I'm definitely enjoying this 6 issue run. They've already released issue #2, so get caught up with this one, because you'll want to jump right into issue #2 to get the initial showdown. Forget Batman vs. Superman, Batman vs. TMNT!

This is one of three signed issues this month! From Amazon:

Interceptor tells the tale of Poli and Weep, two freedom fighters on a planet populated exclusively by blood-sucking vampires. A planet called Earth.

Ok. Mech suit wearing, laser sword wielding, vampires. You had me at Mech! And here is the certificate of authenticity. 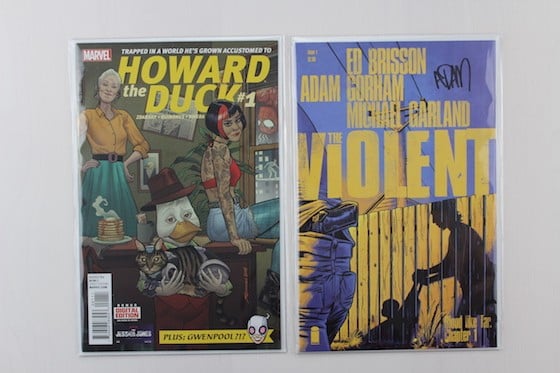 We had previously received this in the November 2015 Comic Block, so this is a bit behind. The good new is that I haven't had a chance to read it just yet, so it's still new to me!

I've heard good things about The Violent - so I was excited to find this in the box! And the certificate of authenticity! While this variant cover doesn't provide value, it is so great! This is one in a decent line of Marvel's Hip Hop variant covers! I mean, Squadron Supreme just feels like Wu-Tang Clan, so this is perfect! This is new to me, and I'm excited to dive in. Verdict: 3 signed editions can mean nothing but a win this month for Comicboxer! I've really enjoyed getting this box for about 6 months now - I get lots of enjoyment from sitting down and trying new titles. The one knock I have is that the boxes feel out of date - I received this box about 2 days ago, and it's the December 2015 box, that includes titles released in November. That's fine for me if I haven't read it already, but some titles are already a couple issues behind.

What do you think of Comicboxer?

What do you thinks the better buy, Comic Boxer or BlindBox Comics?

Stay tuned for my Blindbox Comics review tonight! Both have had some amazing exclusives, but I give Blindbox the edge right now. If you opt into the variant, you’re guaranteed a high value variant, plus they’re a bit more up to date with their delivery choices.