Fit Snack Box is a subscription box containing snacks that each has at least two of the following characteristics: GMO-free, high protein, low sugar, gluten-free, organic, raw, vegan, and/or all-natural. (That is, any given item might be low in sugar and vegan, or organic and gluten-free but not vegan, etc.) The Cost: $27.90/month with free US shipping (save plus receive bonus items with longer subscriptions)

The Products: $32+ worth of full and sample size snacks, protein powders, pantry items, and other healthy consumables selected by a nutritionist.

Ships to: The US, Canada, Australia, New Zealand, South Africa, parts of Asia, and parts of Europe (shipping costs will differ for non-US countries)

Good to Know: This box usually contains some ready-to-eat snacks and sometimes a few pantry items. Although many items will be gluten-free, vegan, etc., you will also receive items with wheat, dairy, and meat-based ingredients on occasion, so it is best if you are an omnivore or live in a household with one. 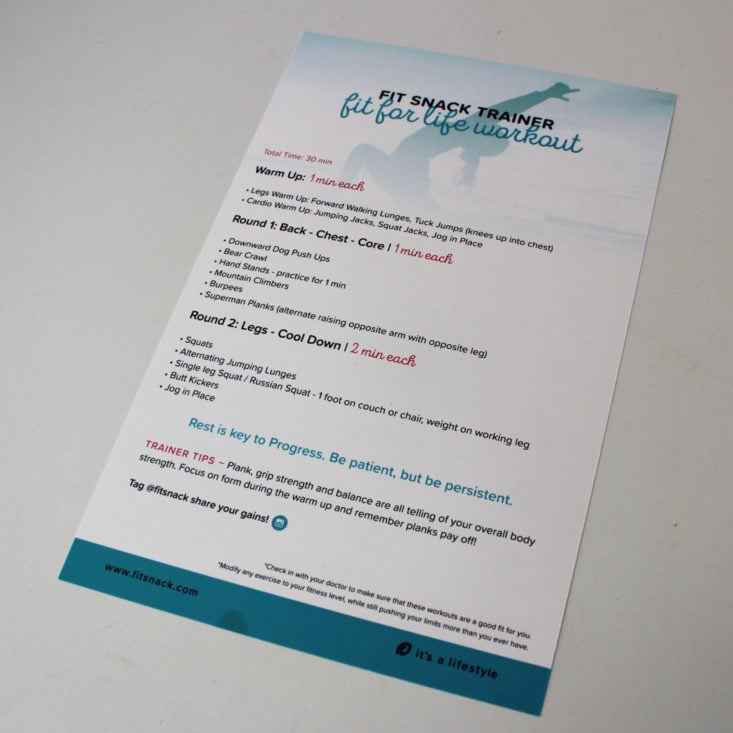 One side of the information card typically has a little more information about the snacks in the box and the other side has a workout for you to try. Sometimes there are also coupons and/or product literature, but not always. We received these in a different flavor in a past box and I am fine with getting them again in a new flavor. I found the last ones oddly addicting, and I think that was true here, as well. The BBQ flavor wasn’t particularly strong but then, I will snack on unflavored almonds so that isn’t a huge concern for me. These are gently dehydrated instead of roasted and I do think that affects the texture, which is somewhat better (I think) than your average raw almond. This was a totally new brand and item for me. I’m kind of on the fence about this. It was definitely worth trying once, but it does have some egg whites and so it kind of has the same texture as an RxBar (I’m not a fan of those but I did like this a bit better). Chewing it actually wore out my jaw and I only ate half – I split it with my husband since it is 500 calories all on its own. I think the thing that keeps me from being 100% on board is the savory flavor. It is just a little bit strange for something with this texture that also has fruit and nuts. It’s not bad, but I don’t know that it’s something I’d seek out.

We’ve gotten various snacks from Luke’s in past boxes but they’ve all been different and I am OK with that. These were cheesy and I appreciate that, but they strongly reminded me of Pirate’s Booty and I just don’t know how many things like that the market needs. I was a bit surprised that these had several whole grain ingredients because they were pretty starchy. This is another item I’ve received in other flavors (here but also, I think, from Vegan Cuts) and I have always felt these had a better texture than most other puff-based snacks I enjoyed eating these quite a bit; they reminded me vaguely of a healthier version of Taco Bell cinnamon twists, though I will admit to not having eaten cinnamon twists for at least two decades so I may just not remember (at all) what they are like. You do tend to receive meat sticks and jerky on a regular basis with Fit Snack Box. Everything else was vegetarian so I’m OK with getting one item I have to pass along to someone else. Conquering West products don’t use chemical preservatives and the recipe was developed by a father and son. One thing I think is mildly amusing is all the cattle ranching imagery on their website, and the product name, and then the fact that it is made in New Jersey. From a flavor perspective, this was probably my favorite item in the box. I think these are originally a British snack and I have had some other flavors of these before, but the cocoa orange ones were new to me and quite good. What is really surprising is that this is only made from dates, cashews, raisins, cocoa, and a hint of orange flavor, but I felt the texture was better than most other date and nut bars. It looks like you can get these in the US now, and they are inexpensive, relatively speaking, and I would definitely consider ordering some more. I think this may be the only item in the box that isn’t new to me, but it’s been awhile since I’ve seen these and I can’t remember which box I received them in last. They are plain roasted pumpkin seeds. I know I often complain about sea salt flavor as being bland but the pumpkin seeds have enough of a flavor on their own that it works here. These are a good source of various minerals including iron and zinc and healthful fats.

Here is another item we received in a past box in a different flavor. This worked well in terms of texture and flavor and the barbecue taste was a lot stronger than with the almonds. I do wish the package had some nutrition information, though, and it was pretty small as well.

Verdict: The August Fit Snack Box had 8 items for an average value of $3.23 per item. Some of the items probably come in at somewhat under that value (like the tiny sweet potato puff sample) but others, like the meal bar, are well above that. What I appreciated about this month was that 7 of the 8 items were vegetarian and I’d only tried one of them before (I was familiar with some of the brands but many of the flavors were new). This is really what I’m looking for in a snack box – discovering new snacks!

Can you still get this box if you sign up today? Boxes ship out around the 20th of the month so it is too late to get August’s box.

Check out our past reviews of Fit Snack Box and the best snack subscription boxes of 2019!

What did you think of Fit Snack Box? 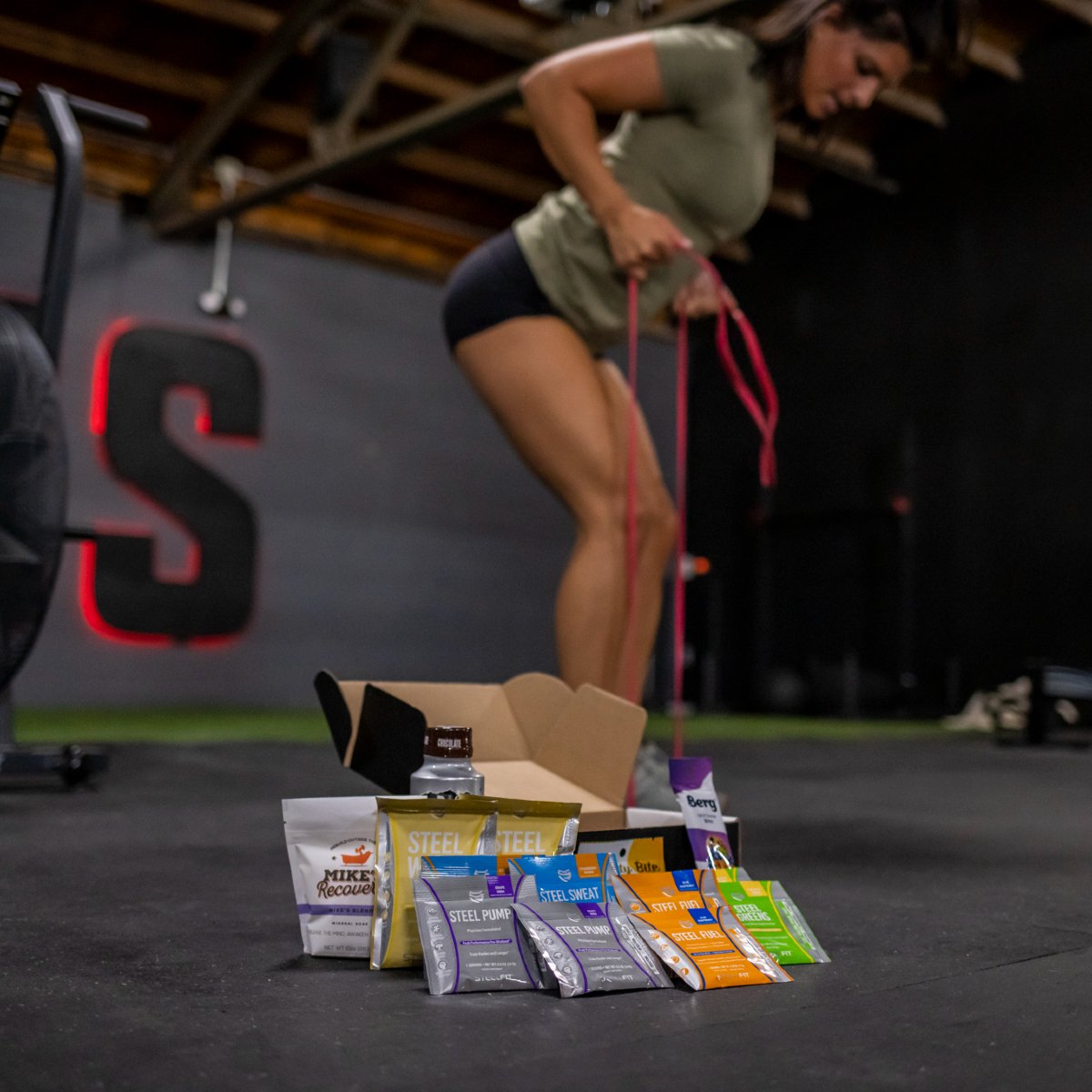 Review
The Lift Box Subscription Review + Coupon – July 2021
Our reviewers research, test, and recommend the best subscriptions and products independently; click to learn more about our editorial guidelines. We may receive commissions on purchases made through links on our site.