by Savannah Sprowls on Aug 27, 2019 | 1 comment
This post may contain referral/affiliate links. If you buy something, MSA may earn a commission. Read the full disclosure. Blue Apron is a subscription meal delivery service. Every week, they send seasonal recipes created by their culinary team with the pre-measured ingredients needed to make them at home. For the 2-serving plan (Signature, Weight Watchers Freestyle, or Vegetarian):

For the 4-serving plan (for families, get-togethers, or meal-prep):

The Products: Fresh ingredients and recipes for delicious, chef-inspired meals at home. I was pretty bummed to see Blue Apron went back to their old packaging design after such a promising redesign last month! Maybe things are still in a state of transition? Also, my box was kindly left out in a torrential downpour by my mail carrier despite having a dry place to leave the package, so please forgive the soggy state of things.

It’s back to the big silver cooler bag we go, which seals shut at the top with a little bit of adhesive. The top flaps are easy enough to pull apart. Inside, we find one large ice pack, beneath which is some sort of cardboard shelf that held the majority of the ingredients in one place. Speaking of ingredients, a lot of them come labeled in bags, but you have to check out the recipe cards to know which meal they go to. Smaller items like butter or sauces come in a “knick knack” bag so they don’t get lost in the shuffle, and those bags are also labeled with the meal’s name. The plastic bags are the same as the ones larger ingredients come in, and they are also recyclable. 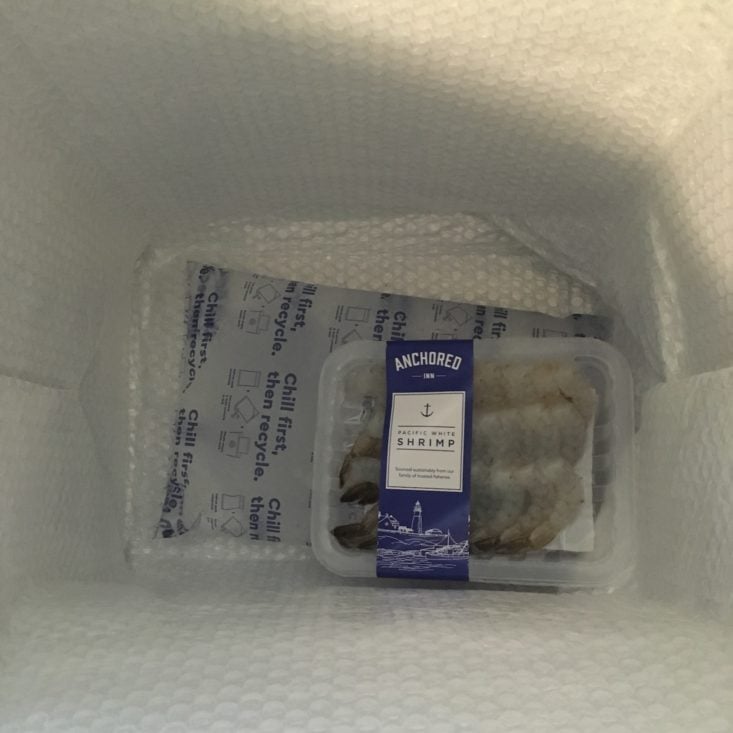 Underneath the cardboard shelf is this month’s solo protein—shrimp, nestled coolly atop another large ice pack.

Normally I don’t get excited over advertisements in subscription boxes, but this one definitely caught my eye. In case you haven’t heard, Blue Apron is now carrying Beyond Burgers! I had my first one in Sydney a few months ago and really enjoyed it, so hopefully I can get my hands on a recipe featuring these for next month. Stay tuned!

Hungry? Yeah, me too. Let’s get into this month’s dishes:

Calories per serving (as prepared): 700

Total cook time according to Blue Apron: 30-40 minutes on the recipe card

After unboxing all of the ingredients, I always take a minute to separate each meal into its own plastic grocery bag for storage in the fridge, so that way, nothing gets lost. Most Blue Apron recipes begin the same way—by rinsing and drying all of the fresh produce.

To get things started, I peeled and chopped ~6 cloves of garlic instead of the recommended two. Then, I thinly sliced and separated the green onions, sawed away the corn kernels from each cob (miraculously without hurting myself), halved the cherry tomatoes before hitting ’em with some salt and pepper, and got rid of the undesirable parts of the poblano before reducing it to a medium-sized dice. Half of the corn, all of the white-bottomed green onions, and the garlic went into a small mixing bowl for later use. The tomatoes also got their own bowl. I was really impressed with the quality of the produce this month! The tomatoes were shiny and perfectly firm, the scallions were in great shape, and the garlic was super fresh.

Getting the pancakes ready was pretty easy. In a medium-sized bowl, I whisked together the cornbread mix, one egg, half the corn kernels, and 1/4 cup of water into a lovely batter.

So, I’m not the greatest pancake maker. It’s a skill I’m still honing. I had a large skillet heating up to medium-high with a little bit of olive oil off to the side while I did the prep work for this dish. Initially, these pancakes weren’t all that structurally sound and started to devolve into a crumbly mess after the first flip. I left them alone for awhile to firm up, and that seemed to do the trick! Another skill I’m still honing is leaving my food alone while it cooks. There were four pancakes total—I just had to do the last one in a separate batch because of pan size limitations. These cooked for 3-4 minutes per side, then were transferred to my green-onion-printed plate to cool off. So apropos, I know.

Once I stopped unintentionally sabotaging my pancakes, I dried off my shrimp with some paper towels, removed the tails, seasoned everything with salt and pepper, then mixed them together in a bowl with all of the cajun spice mix. The recipe said I may have some spice mix left over, but what’s the point in that? I used it all, partially because I thought it would be wasteful if I didn’t, and partially because I don’t always take kindly to being told what to do. In the same pan used for the pancakes, I drizzled in some additional olive oil, then cooked the shrimp for about 5 minutes. The shrimp was transferred to a plate upon completion.

Because we love a single-pan situation, I added just a touch more oil before throwing in the diced poblano with some salt and pepper for about 4 minutes until it began to soften. Then went in the rest of the corn, the white scallion bottoms, my mound of garlic, and some more salt and pepper. Cue a wonderful aroma, courtesy of my garlic overload. After about 2 minutes of letting that mixture heat through, the butter and seasoned tomatoes joined the party for another 3 minutes or so, until the butter melted. The shrimp was then reunited with the crew, followed by a splash of vinegar. Those colors are gorgeous, right? Voila, the finished dish! I served the shrimp mixture atop the pancakes and garnished everything with the hollow scallion tops. It may not look like much in this photo, but the flavors were phenomenal. That last splash of vinegar cut through some of the richness of the butter, and those two elements played beautifully with the heat and complexity of the cajun spice blend. I ate most of the toppings first, then used the pancakes to mop up the rest of the saucy goodness. It admittedly took me quite a bit longer to complete this meal compared to the suggested cook time on the recipe because the prep work took awhile. You’ll have that sometimes. This meal is not one I’d have ever considered making previously as it’s such a far stretch from my typical repertoire, but that’s what I like about Blue Apron—the recipes are creative, and oftentimes inspiring for a frequent home cook like myself. This was a winner for me!

Calories per serving (as prepared): 540 Go, go, gadget rice cooker! Rather than run the risk of ruining my rice on the stove, I called upon my trusty countertop appliance to do the work for me. I added the rice, a big pinch of salt, and 1 cup of water to this beauty, then let it do its thing. The rice finished cooking before I even completed the veggie prep!

After washing and drying all the produce, I sliced everything up—the sweet peppers, mushrooms, scallions (separated, of course), and fresh tomatoes. The pepper slices and white-bottomed scallions got to hang out in a small bowl together afterward. Once again, I was very pleased with the quality and freshness of the vegetables this month! Not that I’ve really been let down by Blue Apron‘s produce in the past, it’s just that these vegetables were in exceptional condition.

In my deepest non-stick pan, I heated half of the sesame oil on medium-high before letting the mushrooms cook in an even layer for 4 minutes. After that, I added in the sliced peppers, the scallion bottoms, plus some salt and pepper. This all cooked for 2 minutes or so. Then, the halved tomatoes joined in on the fun. Everything cooked together until the tomatoes heated through, about 1 minute.

Before I knew it, the veggie mixture was ready for the addition of the canned tomatoes, the demi-glace, and the gochujang. Blue Apron suggested only using as much gochujang as I’d like, based on how spicy I’d like the dish to be, but you probably already know my feelings on having leftover ingredients. Plus, they only provided about 1 tablespoon of gochujang! At that point, you’ve pretty much gotta just use it all. I personally love the stuff, so the more, the merrier (until a dish becomes inedibly hot). Everything cooked together for another 4 minutes before I took my spatula and made two wells for my eggs. From here, I put a lid on the pan and left the eggs to cook for upwards of 8 minutes. It took awhile for the whites to set.

To the cooked rice, I added the other half of the sesame oil and the entire packet of black and white sesame seeds. I often forget how many different ways rice can be elevated. These were pretty interesting add-ins. It wasn’t until about halfway through making this that I realized I was essentially cooking Korean-inspired shakshuka—a dish I’ve made many times, usually with potatoes, peas, white beans, and some sort of leafy green. This was such a creative take on that recipe. The standout flavors were the gochujang and the sesame oil, both of which were greatly welcomed. I really liked the add-ins to the rice, and found the portions to be pretty generous for a two-serving meal! This wasn’t the most impressive dish I’ve made from Blue Apron, but I still enjoyed it nonetheless. It’ll be easy to recreate, and it came at a good time, too. I’ve been wondering what to do with the massive tub of gochujang I have in the fridge.

Verdict: My experience with Blue Apron this month was all right. Between the two dishes, the cajun shrimp and corn pancakes was the clear winner. I’m thinking I’ll get a little more adventurous with my recipe choices next month, and hopefully I can get my hands on some of those Beyond Burgers. As for value, I felt the cajun shrimp and corn pancakes exceeded the $11.99/plate cost easily, while the egg and veggie skillet came up a little short, which ultimately balances everything out.

Can you still get this box if you sign up today? Recipes change every week, so these are gone for now, but popular ones always come back in the future. Sign up today to choose from a whole new crop of meals.

Check out all of our Blue Apron reviews and find the best meal delivery kits of 2019!

What do you think of these Blue Apron recipes?

How do subscribers rate Blue Apron?

Do you subscribe to Blue Apron? Add your rating now!