by Anna Rodriguez on Jun 18, 2019 | 5 comments
This post may contain referral/affiliate links. If you buy something, MSA may earn a commission. Read the full disclosure. Super Geek Box is now Super Geek Box Prime—the most epic box yet for nerds and gamers. The original box was a smaller monthly delivery they’ve moved away from entirely and now offer Prime, a quarterly box for $56 + $10 s/h. 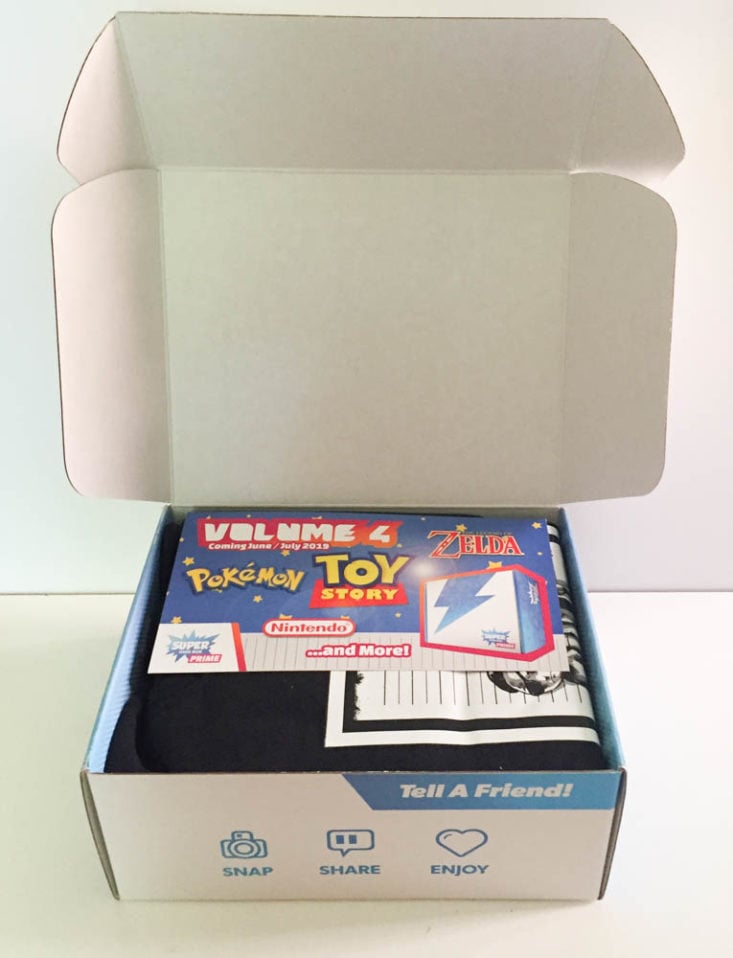 The Products: A quarterly box featuring over $100 of value in each epic edition. It comes with this little info card that details each item. On the back of the info card is a sneak peek at what might appear in the next volume. Past Super Geek Boxes came with a little button, so naturally, the Prime edition would come with a big button. Hooray for Kirby! My 11-year-old adores Kirby. My 13-year-old son jumped for joy, literally, over this sweatshirt! He loves Rick and Morty! So do I! It’s nice and warm, and it feels pretty well made and durable. This is a Super Geek Box Exclusive. My kids are not crazy about jigsaw puzzles, but they totally love Star Wars! They also really love Funko Pops, so they were thrilled to get this puzzle! I think they may actually sit down and put it together. These socks are another exclusive Rick and Morty item from Super Geek Box. Meesocks! Look at how cute they are! They are also nice and soft. I’m actually not sure what the original retail value of this tumbler is as they are sold out on the Zak! website. A tumbler of the same size in a different graphic is available for $6.99. But in any case, I recently learned we are a Marvel household. That did not stop my 13-year-old from grabbing this tumbler and claiming it as his own! I like it because it is BPA-free and helps prevent spills. Once again, the 11-year-old is psyched! We love Kirby over here! This little guy is actually no longer for sale online anywhere outside of eBay. He’s so special! He was part of a limited design by Nintendo during their 20th anniversary. He went straight onto my son’s backpack, of course! My sons are both obsessed with Fortnite, so this was a nice surprise for them! It’s a glowing llama! I think my 13-year-old is the only one in the house who has an actual mouse, so this went to him. He loves it!

Verdict: My sons LOVE Super Geek Box Prime! It seems to hit their favorite franchises, and the items are good for their age range. My 13-year-old’s favorite item was the sweatshirt, and the 11-year-old’s favorite was the Kirby keychain. It’s hard to comment on the value as three items have unknown values, but some of the items are exclusive to Super Geek Box Prime. If my estimates are near correct, the total value would be around $81.39, which is well over the cost of the box + shipping ($66). I feel confident that the value is there with this box.

Can you still get this box if you sign up today? Unfortunately, no. The spring box has passed and the summer box has sold out, but orders are currently being accepted for the October box!

Read our other Super Geek Box Reviews to get more information on this subscription, and check out our best geek subscription boxes!

What did you think of the Spring 2018 Super Geek Box Prime?

Do you subscribe to Super Geek Box? Add your rating now!