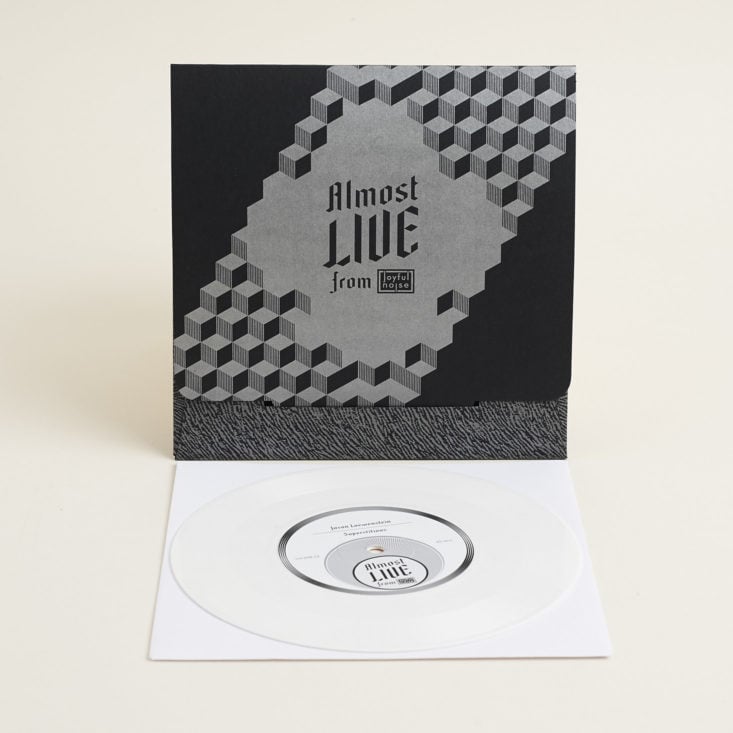 I’m a huge fan of Joyful Noise and a few of their artists (like Rob Crow and Joan of Arc/Tim Kinsella) are some of my favorites of all time. I’ve inadvertently bought some of their unique releases (like this Lil Bub flexi), so when I became aware that they had a monthly 7″ series, I had to sign up! A lot of the 7″s from their various series sell out since they are super limited, so to be guaranteed one of them each month is really exciting!

Let’s see what I got! Looks like I received a record from their “Almost Live” series in which they invite an artist to perform a song at their HQ in Indianapolis, record it, and release it as a one-sided 7″ on white vinyl with a screen printed image on the non-music side. It also comes in a custom die-cut matchbook sleeve! Super cool! …and specific liner notes for the artist and song on the other. It also includes a cute little story about how they ended up recording this song while on a “house show tour” where they only played living rooms. Bonus: Bob D’Amico from Sebadoh and Matt Friedberger from The Fiery Furnaces backed up Jason on that tour and play drums and bass respectively on the recording. Here’s side A of the crisp white vinyl, the playable side which has the song “Superstitious”. I wasn’t familiar with Jason Loewenstein until this record and after reading his Wikipedia entry, I learned that he was a member of Sebadoh (who I somehow never got into, but is in my wheelhouse) and eventually started a solo career as well. The music is quick and poppy while holding steady to punk/indie tendencies which makes it undeniably catchy. Although I didn’t immediately care for his gravelly voice, it’s starting to grow on me. Check out the video here! The other side of the record doesn’t contain music, but has a bright orange skull and crossbones jack-o-lantern screen-printed on it, making this super collectible and unique. This pressing was limited to 1000, will never be re-released, and is now sold out, so the only way to get one now is through a third-party reseller on a site like Discogs. Although it’s probably a bit too new to see any data on past sales, there are currently 3 for sale, starting at $15.00. In addition to the 7″, subscribing to this series gives you VIP access to Joyful Noise releases so you can get first dibs on preorders, 10% off in their store at all times, free downloads, cheap shipping, and sometimes even free tickets to shows in your area. I’ve already used my status to do an early pre-order of the new Joan of Arc record, 1984, which is limited to 300 on clear and blue pinwheel vinyl with an accompanying white flexi! Wheee!!

Verdict: The Joyful Noise VIP 7″ Series is a record-collecting nerd’s dream. They have some of the most creative and innovative releases out there and getting VIP access to some of my favorite artists is spectacular. Even if this month’s 7″ didn’t hit the nail on the head for me, it’s still collectible, and I can’t wait to see what I get next!

Can you still get this box if you sign up today? It looks like that ship has sailed, but sign up now to get the 7″ for April!

Value Breakdown: For $18.00 ($15.00 + $3.00 shipping), I got a limited edition one-sided 7″ plus a month of VIP access to Joyful Noise Recordings. Since the 7″ was sold for $10.00, and the VIP membership is $5.00, I am basically breaking even and paying for the shipping of the record. It’s worth it to me since I get the small 10% discount and early access to new releases that may sell out quickly or go up in value at some point in the future.

What do you think of the Joyful Noise Recordings VIP 7″ Series?

) to get the latest Joyful Noise Recording spoilers, reviews, deals, and news delivered to your inbox.