The Vegan Cuts Snack Box is a monthly subscription box from Vegan Cuts full of vegan and natural food products and snacks. Many of the items will be gluten-free, but this box is not a dedicated gluten-free box. Vegan Cuts also offers a Beauty Box and quarterly Makeup Box. I think Vegan Cuts has really stepped things up lately in terms of snack box curation. Let’s see what they sent for February: These were just a plain, sea salt flavor. They were pretty starchy. My husband says they stuck to his teeth but I didn’t really experience that problem, myself. These would be good dipped into hummus or a well-cooked, semi-mushy Indian dish. I think the inclusion of two large, heavy drinks in this box is what contributed to most of these being smashed. This is the third month in a row we’ve received Mini Pops in the Vegan Cuts Snack Box. At least the flavors were different. Although this is much more “lemon” and much less “sriracha” (I didn’t find it to be very hot). This is popped sorghum and the pieces are super tiny. My husband and I split this and we each had to eat it with a spoon. It isn’t really good finger food because of the small size. These are roasted lentils. It looks like there are several different varieties of lentils in here, which is fun. I kind of think that the success of crunchy chickpeas has made lots of companies explore the space that makes up “roasted legumes.” Sometimes it works (fava beans, and of course peanuts are legumes as well) but I am not so sure about these. In addition to being tiny, tiny, tiny and hard to pick up (we used a spoon for these too), they were hard enough that I was a little worried about breaking a tooth. I think these would be better as a topping on some other dish (like sprinkled in pumpkin soup or something). This brand and product are new to me. I’m not sure I fully thought through what “tea infused” meant and these did not keep me up at night, so I’m guessing the caffeine level isn’t actually that high. They are similar in flavor and texture to other puffed grain bite-sized snacks (on the harder side, not chewy like Rice Krispie treats). My husband and I were both fans of this snack so we were happy to receive a larger bag like this containing several servings. This had some kind of crisp in the middle with a dense chocolate surrounding it. It actually had quite a satisfying texture and didn’t taste like turmeric at all (a good thing in this context). This is a straight-up candy bar with fruit and nuts. Interestingly, the fruit was strawberry, which you don’t often see in this type of product, but it totally worked. I am always up for chocolate candy and I was a fan, but I’m not sure I would pay $3 for a single candy bar, either. Ah, Rawrev Glo bars. I had oral surgery last year and ate SO MANY of these. Because I could cut them into like 18 pieces with a knife and gingerly feed the tiny pieces into the back of my mouth for chewing without disturbing the surgery site. But I still like them, even after that. This is a new flavor for me. I didn’t really get “brownie” out of it, but the chocolate flavor was enjoyable, nonetheless. I’m not entirely sure if the item I linked to is the same one I received because the bar I received doesn’t look like anything on their website, but this is a new company and I think they are testing packaging, etc. (I have seen this product before in Bulu Box.) Peanut butter/chocolate is probably my favorite flavor combination and this had a good (non-gritty) texture for a plant-based protein bar. I am not sure why this is marketed only towards women. Although the bar is kind of small, it has the same number of calories as an average Quest Bar. This is pretty standard granola (gluten free, but contains GF oats, which I know some people avoid). I am not a huge granola eater and I tend to stick to non-GF brands, anyway, because they usually cost less and there is no reason for me to avoid gluten. I also received this item in Love with Food this month. This brand has been making the rounds of food subscription boxes but at least it is a different product for once (I have previously received like a shipping container full of hazelnut chocolate spread from them). These are good little coconut cookies that aren’t too sweet and hold together pretty well. This is a product I’ve received from at least two or three other boxes but I happen to like them so I’m OK with that. I don’t really taste the tea in these (they’re mostly fruity) but I feel that tea can help improve the breath so these are nice to have around after meals. (And they’re super low in calories, too.) The concept here is that this product has MCTs (medium chain triglycerides) from coconut oil, which are supposed to be available immediately for an energy boost. My husband and I were not fans of this. I think part of the problem is that a lot of the flavor comes from coconut water, which neither of us cares for, and also that they were trying to mimic a dairy-type texture and didn’t really succeed (I’m a vegetarian, not a vegan, so I could compare to the texture of cow’s milk). This brand shows up in the Vegan Cuts Snack Box fairly often. In the past, I have been a fan, but this particular product was another miss for me. If I had to describe the flavor, it would be “B vitamins with a dash of coconut.” This has a lot of B vitamins (so many that it is colored yellow from them) and is coconut-water based, which, while a natural source of electrolytes, is not a flavor I care for. (Coconut water is subtly different from plain coconut flavor – I love macaroons and such.) 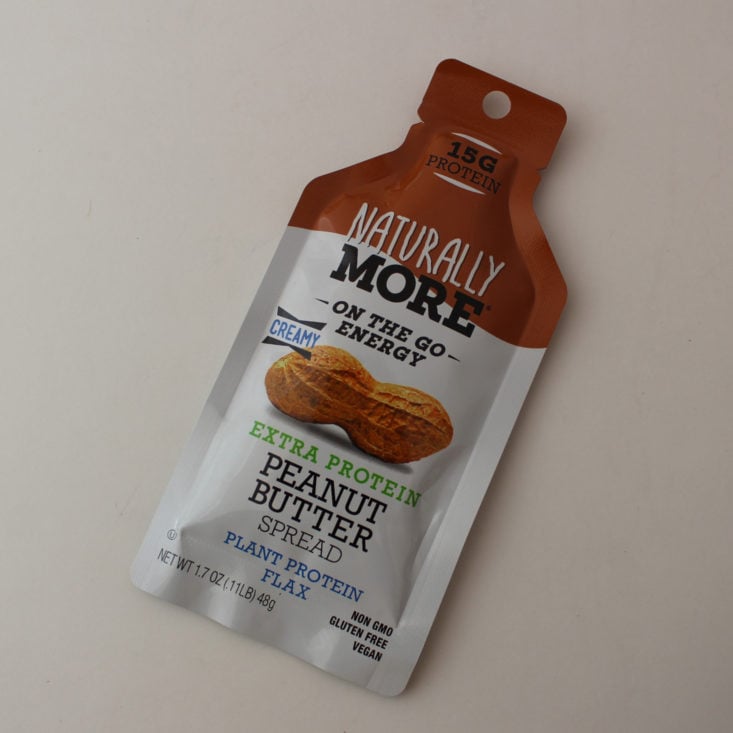 This is protein-enhanced peanut butter. (You can get a chunky version in a jar, but that obviously wouldn’t work for a squeeze pouch…) I like peanut butter and I was happy to eat this (and no, it wouldn’t really work with the naan chips as they had this buttery flavor that would conflict with the peanut butter), but I can buy several cups of peanut butter from the grinder machine at Whole Foods for a lot less (though they don’t have the added protein, but I don’t really need that, either).

Verdict: This month’s Vegan Cuts Snack Box had 14 items for an average value per item of about $1.64. I think this was a decent month. There were a few repeats and/or common food subscription box items, but also enough items that were new to me to make it worthwhile. I do love getting a box where I can just eat everything without scrutinizing the ingredients lists first. I was not so big on the drinks both because I don’t care for coconut water and because they smashed the chips, but all the chocolate stuff was wonderful.

Can you still get this box if you sign up today? No, your first box would be March’s box, but some of the products may be available from the Vegan Cuts shop. Check out our spoilers!

Check out all our Vegan Cuts Snack Box reviews and the Food Subscription Box Directory!

What do you think of the February Vegan Cuts Snack Box?

) to get the latest Vegancuts Snack Box spoilers, reviews, deals, and news delivered to your inbox.