If you sign up for an ongoing subscription (as opposed to a single month), you’ll receive a bottle opener and tasting glasses with your first box. Hop over to this review for details on these welcome gifts. About The Craft Beer Club

ACTIVE DEAL: Receive 3 bonus gifts with your first shipment! No coupon needed - just use this link. 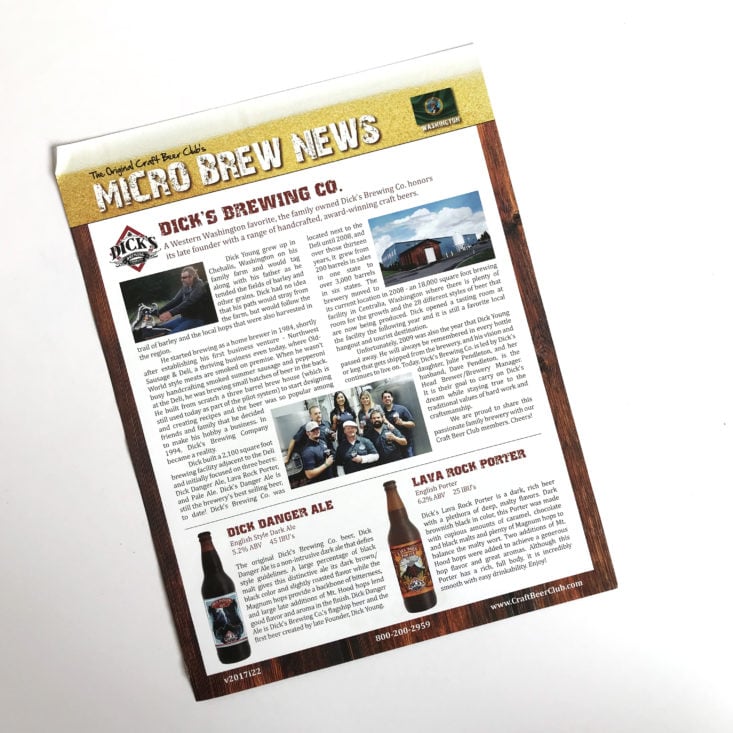 The Craft Beer Club includes flyers that provide information about the brewing companies and beers featured in each month’s box. This month’s box includes beers from 3 Sheeps Brewing and Dick's Brewing Company. I love that each brewery has a food recipe on the back of their card to highlight a meal that would pair nicely with their beer. I also got a cute welcome letter! I also got this set of 4 coasters! They are sturdy and super cute. I can't wait to use them during our beer tasting! Our first brewery of the month is 3 Sheeps Brewing, founded in 2012, but has roots dating back to 1926 when the owner Grant Pauly's great-grandparents purchased a brewery. Grant started out brewing at home but quickly opened 3 Sheeps Brewing after a local brewpub went out of business. Within the first year, it was named Best New Brewery in Wisconsin. 3 Sheeps is focused on creating cutting-edge beer styles to show the people of Wisconsin a different side to beer.

Waterslides is an India Pale Ale boasting 6.7% alcohol and 60 IBUs. According to the monthly booklet, it has more body than your typical IPA and more hops than your typical Wisconsin beer. This was my favorite beer of the month, with its hops and pine flavors, it is just that easy IPA! There were hints of citrus that reminded me of summer and a little spice. This was such a smooth and easy beer to drink! Our second beer from 3 Sheeps Brewing is Rebel Kent, a Belgian-style Amber Ale with 5% alcohol and 23 IBUs. The monthly card notes that this brew was inspired by the Abbey Single, the beer that Belgian Monks working in the fields drank because of the low alcohol and sweet flavors. So interesting! For me, I don't typically love amber ales, but this was unlike any amber ale I have tasted. It was sweet with notes of caramel but not too sweet. It was refreshing and smooth so it made it very easy to drink. You get that malt flavor and a nice spice at the end. So delicious! Our next brewery is Dick's Brewing Company that started as a homebrew in 1984 but grew into what it is today in 1994 from founder Dick Young. Originally, Dick opened the famous Northwest Sausage & Deli where he put the brewery next door with the intent of having the deli and featuring three brews. In 2008, the brewery expanded to an 18,000 square foot brewer in Centralia, Washington. In 2009 Dick sadly passed away, but his memory and brewery live on through his daughter Julie and son-in-law Dave who are now the Head Brewer and Brewery Manager.

Our first beer is the best selling beer from Dick's Brewing Company, Dick Danger Ale which is an English Style Dark Ale. Coming in at 5.2% alcohol and 45 IBUs is unlike many dark ales I have tried. Instead, this tasted much more like a wheat beer to me! There is a light roasted flavor, plenty of hops, and a bitter finish. It was sweet and smooth with a raisin-like scent. I have had many English Style beers, but this beer takes that style and adds a whole new level of uniqueness. What a wonderful beer to try! Last but not least we have the Lava Rock Porter, and English Porter coming in at 6.2% alcohol and 25 IBUs. This beer is thick yet super easy to drink. There is a lovely sweetness with flavors of caramel and chocolate. It is hoppier than your average porter which is what I love so much about this brew! It is full but not overpowering, making it a beer that is easy to enjoy on its own or with a great plate of fish and chips. Here is our beer line-up for the month! From right to left: Waterslides, Rebel Kent, Dick Danger Ale, and Lava Rock Porter.

Verdict: This was my first time trying The Craft Beer Club and I really loved it! There was so much information about both featured breweries and great detail about each beer. I loved that each brewery added a recipe for a meal that would pair nicely with each of their beers. The best part is that The Craft Beer Club is doing a great job in highlighting breweries that might not be known to someone that doesn't live in the state that the brewery is located in. They are bringing unique beers right to your door to try, and this month really offered a unique curation of craft brews. My husband and I love trying new beers so this really was the box for us because you can't beat that overall value, plus free shipping!

Can I still get this box if I sign up today? No, you will start receiving the January box.

Coupon - Receive 3 bonus gifts with your first shipment! No coupon needed - link here to sign-up and learn more about the gifts.

Value Breakdown: The monthly cost of this box is $42 with free shipping for twelve beers, which averages out to $3.50 per beer. I have to say that I was shocked to see that The Craft Beer Club offers free shipping since so many boxes like this have a high shipping rate just due to the weight of the box. This seems to really drive the overall value per beer up! This box features specialty craft beers that would cost more than that $3.50 average if you ordered them out at a bar or restaurant. Plus, you are getting so many beers!

The Craft Beer Club discovers exceptional craft brews from around the country and delivers them each month direct-to-you or your gift recipient. Every selection is produced by small-production, independent brewers who use only traditional brewing ingredients and time-honored brewing methods.
Deals
Reviews
Read customer reviews >Write Your Own Review
Posted in Subscription Box Reviews

3 sheeps is great! I’m from WI. Really cool waterslides is a favorite of mine and my SO.

That’s awesome, I loved reading their story. Plus the beer was A+!