EXCLUSIVE DEAL: While supplies last, use this link to get $3 off any subscription PLUS get a Star Wars Bonus Item with a 3-Month subscription! (This $3 off + Free Bonus on the 3-month deal is only available for MSA readers).

If you want this box, you can still get it while supplies last! Get your box with our exclusive deal!

The Products: Games, toys, collectibles and other exclusive gear.

Ships to: US, UK, Canada 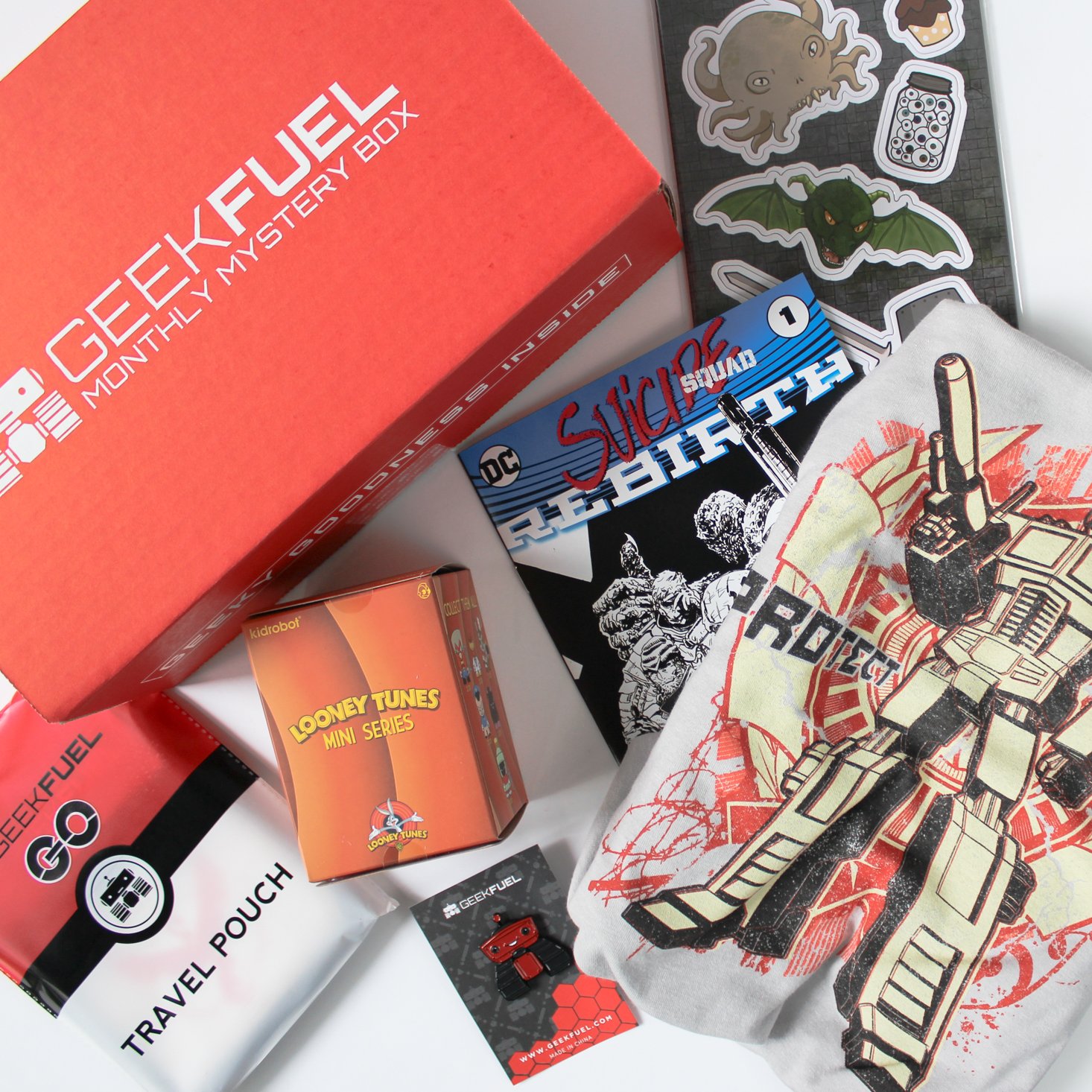 Each month comes with an information card detailing each item inside. Geek Fuel doesn't have themes, but you'll know 2-3 franchises in each month before it ships. You'll also receive a mini magazine with more interviews and stories inside! This month's exclusive shirt features Transformers! It's a cool and simple design - I like it, even though I'm not the biggest Transformers fan. I appreciate that Geek Fuel has been getting license deals for shirts lately - I think that leads to better shirts, and hopefully more cool items in the future. The next item was a mystery mini figure from Kidrobot. I grew up on Looney Tunes, so I was excited to see which character I received. I got Tweety Bird in bat form - which is a bit more rare than the normal figure in the box. Here's a look at the other rare figures you could have received! I love that some of these are from the Looney Tunes movies - I watched them until the VHS tape broke. The next item is a pouch made to take with you on your hunt for Pokemon. This trainer's companion ever has cards to show your allegiance to you team. Team Instinct, Valor, and Mystic are all represented. It also has a pull-string lanyard so make it easy to carry around. It has a zipper pocket and larger open pocket when unfolded for storage. A smaller phone could definitely fit as well, but my iPhone 6 Plus didn't quite allow the flap to velcro shut. The Suicide Squad item this month was the #1 comic in the DC Rebirth line. I don't know much about Suicide Squad, and I haven't seen the movie yet, but I liked this issue. It details Rick Flag joining the group while giving a little background on some of the team members. It's a good first issue, in my opinion, because I want to start issue #2!

This is an exclusive variant cover as well. There was a black and white variant, and a color variant. The black and white version is limited to 3,000 issues - so that should make it a bit more valuable to collectors. It's a cool top-down Zelda-like game. It looks like a blast and is supported by both Mac and PC! It comes with a 6-piece magnet set featuring characters in the game. I love it when Geek Fuel includes a little extra with their Steam game! The last item with a Geek Fuel pin. In a month where they featured the most famous robots in the world - it's fun to feature their own Geek Fuel robot.

Verdict: This was a good month of Geek Fuel for me! I was a fan of the shirt, game, comic, and especially the Looney Tunes Kidrobot figure (I'm worried that I now have a new obsession to collect)! Geek Fuel has done a good job with its value for a long time now, so it's nice to know that you're going to get good value in your box. They've also done a good job curating which games to include - I've loved that past couple of Steam games, and the fact that they've been supported on Mac and PC makes me really happy - they've definitely made an adjustment and focused on that more.

What did you think of the August Geek Fuel?

By Christen Russo  |
Mar 5, 2022  |  10 comments
Our reviewers research, test, and recommend the best subscriptions and products independently; click to learn more about our editorial guidelines. We may receive commissions on purchases made through links on our site.