MSA is reader-supported. When you buy through links on our site, we may earn an affiliate commission. Read the full disclosure.
Geek Subscription Boxes/The BAM Box Reviews/ Just a reminder – as of last August, there are no more themes! About The BAM! Horror Box

The Products: Limited edition, exclusive, and autographed horror maniac items with $60+ in value and 1 in 10 boxes contains an autographed item. Plus, every box is guaranteed to have an exclusive or limited edition art print.

This month features items from Five Nights at Freddy’s, The Mummy (1932), Frederick Charles (Freddy Krueger/Nightmare on Elm St), and art from Oscar Van! This sheet gives info on this month’s box and also regarding the BAM! Community where you can trade items, enter contests, get the latest BAM! news, and meet fellow horror fiends and Bammers alike! The form also suggests looking in email and at the site for info for the September box! Next to Michael Meyers, Freddy Krueger may be my favorite horror movie villain! I was so pleased to see this creep in this month’s BAM! Horror box! This pin was the more mild and wider released of the three variations, but I would have been pleased with any of the three selections! To be honest, I had no idea what this was referencing till I went to good ol’ Google! The prints’ art references the early 2000s movie, Thir13en Ghosts. There are two variants and I got the rarer of the two that is limited to only 500! The print is signed by the artist, Oscar Van, and includes a Certificate of Authenticity. 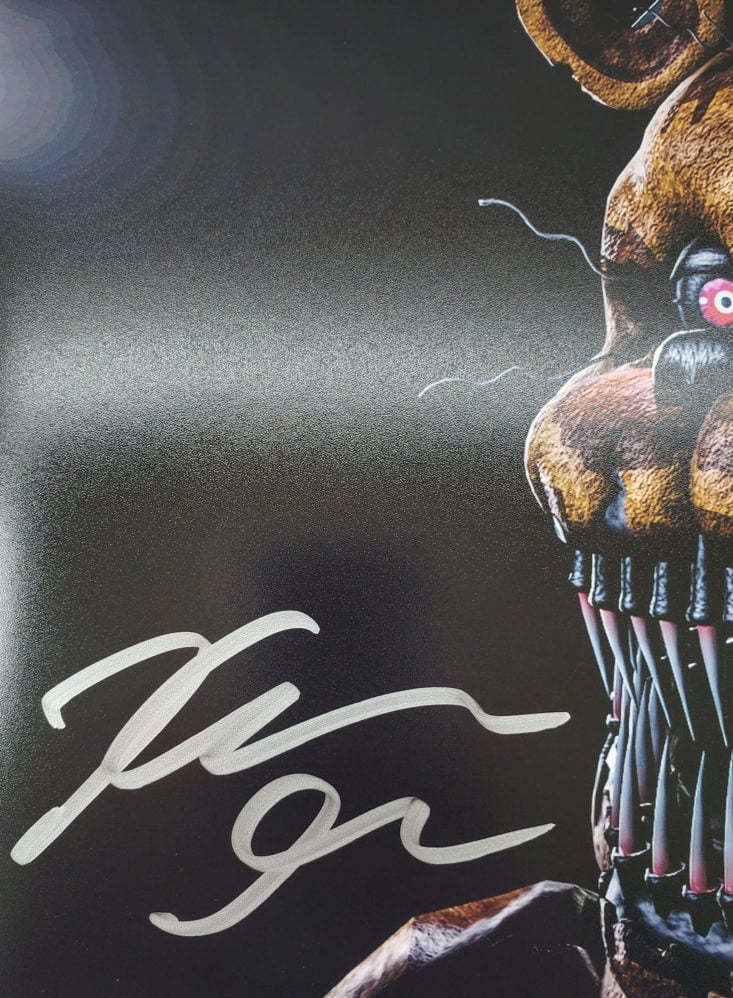 Guys, I have seen this Freddy character on merch at Target and Five Below, but this is the first time I really read up on the independent video game, Five Nights at Freddy’s. I like the concept that revolves around a Chuck E. Cheese-like restaurant Freddy Fazbear’s Pizza. The first of the five games revolves around night time security guards trying to escape the homicidal animatronic characters at Freddy’s! This 8×10 is signed by the voice of Freddy, Kellen Goff, which is pretty neat if you are a big fan of the games and movies! Finally, we have a recreation of the Scarab ring from 1932’s, The Mummy, by Dark Matter props. This may be one of my favorite props, in part because I can wear it. Universal Horror movies and Boris Karloff are legendary, so this is an awesome piece!

Verdict: This month’s BAM! Horror was alright, but not amazing. My favorite pieces were the Freddy Krueger enamel pin and the Scarab ring from The Mummy. I would love to see more wearable horror themed items in this box, whether it be other pins, t-shirts, hats, etc. Heck, even exclusive figures or Funko collectibles would be a fantastic change up! The signed photos and art are fine but aren’t terribly exciting. I am hoping the September Anniversary box and October Halloween box will be more energetic and thrilling in terms of their selections! Fingers crossed, fellow horror fiends!

Can you still get this box if you sign up today? No, you will receive the October box. From Bam!:

Your box will ship on the 28th of every month. Please order by 5 pm on the 17th to get the current box.

What did you think of August’s BAM! Horror Box?

How do subscribers rate The BAM! Box?

Never miss a post: get email alerts about The BAM! Box!

) to get the latest The BAM! Box spoilers, reviews, deals, and news delivered to your inbox.