MSA is reader-supported. When you buy through links on our site, we may earn an affiliate commission. Read the full disclosure.
Home/Geek Subscription Boxes/Escape The Crate Reviews/ Escape the Crate brings the experience of escape rooms to your home! Every other month, they deliver a new adventure – anything from pirate ships, deciphering alien languages, murder mysteries, time travel, defusing bombs, and more. Escape Rooms have become such a quickly growing sensation in the last couple of years. As cool as they are, they can get pricey and once you do one you can’t repeat it. My husband and I have seen a couple in-your-home escape room games in date boxes before, but this box is all one big escape room experience.

This is a review of the Escape The Crate “Outlaw” themed box. About Escape The Crate

The Subscription Box: Escape the Crate

The Products: Each box contains the puzzle pieces that go with a whole escape room story, designed for 2-4 people. Inside, you’ll find letter, ciphers, puzzles, tools, objects, etc. that help you complete the mission.

Ships to: US for $5.00 and International for an additional cost This is the starting information sheet. It tells you how to get all set up and where to go on your computer or phone to begin. Inside we found all sorts of envelopes, papers, puzzles, and items to use for various puzzles and activities in our adventure! One thing that I thought was cool was that even the box was key in more than a couple different puzzles! One of them even included undoing and opening the side of the box to find a code. The story of the adventure is provided primarily through their web page specifically for this Outlaw themed box. (Each box has online components like this.) I liked this because it made it easy to follow along with what we were discovering or decoding and figuring out what we had to do next without fumbling through papers or trying to find which one to use in which part or accidentally seeing something from a future puzzle solution.

One of my favorite parts of the escape game was that they had all exposition typed up but also recorded for listening! I liked this so much because we could mentally pause between puzzles to sit and listen to the next section instead of having to read it and it also added personality to the game. Each web page offered the next possible steps (which weren’t always obvious – sometimes you had to match up what you were supposed to do next based on whether you got a password or a number code to proceed). They also offer hints at the bottom of the page. 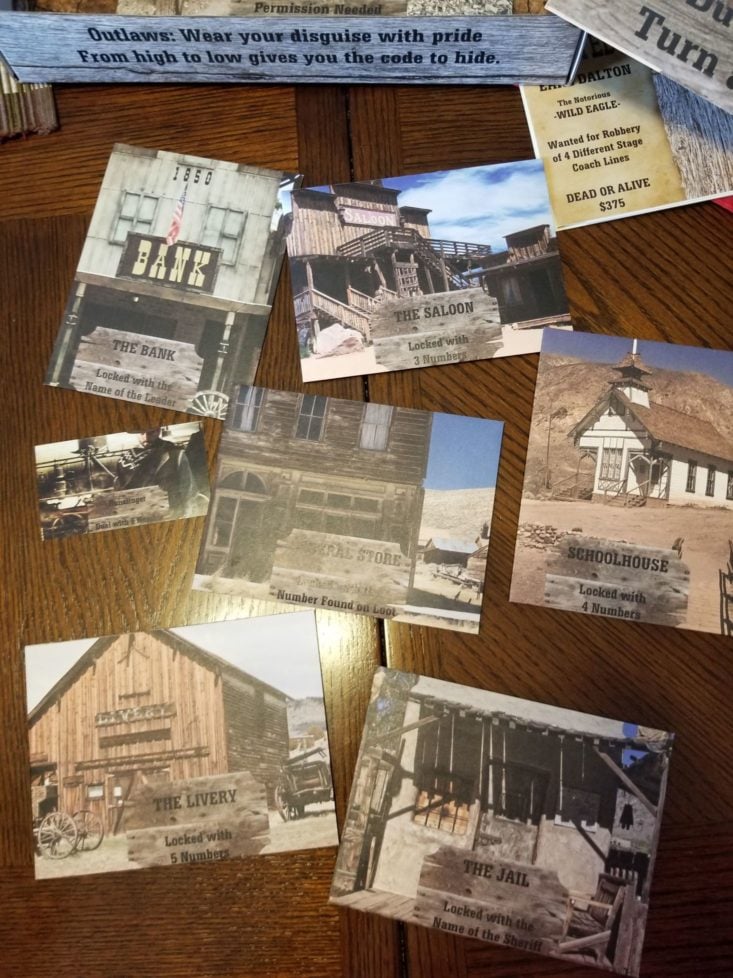 It’s pretty obvious, but our escape game adventure was set in an Old West setting and it started with figuring out a code based off of what you “saw out your window” (the inside lid of the box) while arriving via train and figuring out the map and layout of the town. There were even two sides of the story to go through: the Outlaws and the Law. Each building is represented by these envelopes which had their own passcodes to get in and the outlaws’ turf was on one side of town and the law had an occupation on the other. This made it possible to split up your party and have half tackle the law path (teaming up with the sheriff to take down the outlaws and find what you need from them), which was marked as an easy/medium difficulty level, and half tackle the outlaw path (going undercover with the outlaw gang and trying to find what you need that way), which was marked as a medium/hard difficulty level. You can also choose to work together, which maybe Luke and I should have done, but we were hoping to save some time so he chose the Outlaw path and I chose the Law path. One of Luke’s Outlaw puzzles even involved finding a pattern or numbers represented in the bandanna they sent when folded and worn a certain way. I took the law path and got a sheriff’s badge that I figured out was a part of solving another puzzle on my Law path. You set your own timer; they suggest 60 minutes for “expert/experienced,” 75 minutes for regular/casual, and 90 minutes for easy/new. These puzzles were not easy! We chose to use the 75 minute suggestion, and we still needed about 10 extra minutes (although, if you choose to work together instead of splitting up you were instructed to add 20 minutes at the end of one path before starting the other path, which probably would have helped us).

They have a “time’s up?” button on each page if you run out of time, but since the website didn’t track the time for us we chose to just continue to finish and see how long it actually took us. If you click the “times up” button, it says “you hear the sound of your train out of town pulling into the station, and you’re not on it…” (and a little more that gives away some of the story), and it tells you to add 5 minutes to your clock because “you figure the train will stay at the station for a few minutes preparing for its departure,” and if you run out of time again it offers a little story to wrap up and says “unfortunately, you failed this mission but you can always go back and play without a time limit to see the rest of the story or reset the game to begin again.”

The Verdict: We had fun with our first Escape The Crate! I thought the puzzles and clues were cool and interactive and I liked how they involved a lot of different things like all the items they sent and the box itself for multiple clues. There was even a little black light needed for some, which they instruct you to hold on to for future boxes. Plus I loved that there was an option to split the party. All in all, it was a fun time and I’d be excited to try the next one with friends, especially if we choose to split up again. Since it was just the 2 of us, I think next time we’ll just work together so we’re doing the whole adventure side by side. I know there are some super cool escape rooms out there with elaborate rooms and sets, so I don’t think this subscription would replace those at all, but if you like puzzles and escape games and wish you could do them more frequently without the price (or having to arrange for a sitter, if you’re a parent of young kids), this is a fun way to get a similar experience!

Can you still get this box if you sign-up today? Yes, this particular Outlaw box is available as a standalone purchase, not as part of their bi-monthly subscription. You can purchase it as a one-time order here. Order between now and the end of October and your first box ships out the first week of November.

Value Breakdown: This box was originally part of their subscription, which costs $29.99/bi-monthly, but is now “retired” and available as a one-time, individual purchase of $39.99 from their shop. Looking at prices for in-person Escape Rooms near me, it looks like the cost in my area ranges from $24-30 per person. As a subscription, getting an escape room experience for the cost of just one ticket to a local one seems worth it as an alternative for a regular (bi-monthly) basis (especially for us with small children considering we’d have to also pay for a babysitter).

Check out all of our Escape The Crate reviews and more puzzle subscription boxes in the Geeky Subscription Box List!

What do you think of the Escape The Crate “Outlaw” box?

How do subscribers rate Escape The Crate?

Never miss a post: get email alerts about Escape The Crate!

) to get the latest Escape The Crate spoilers, reviews, deals, and news delivered to your inbox.