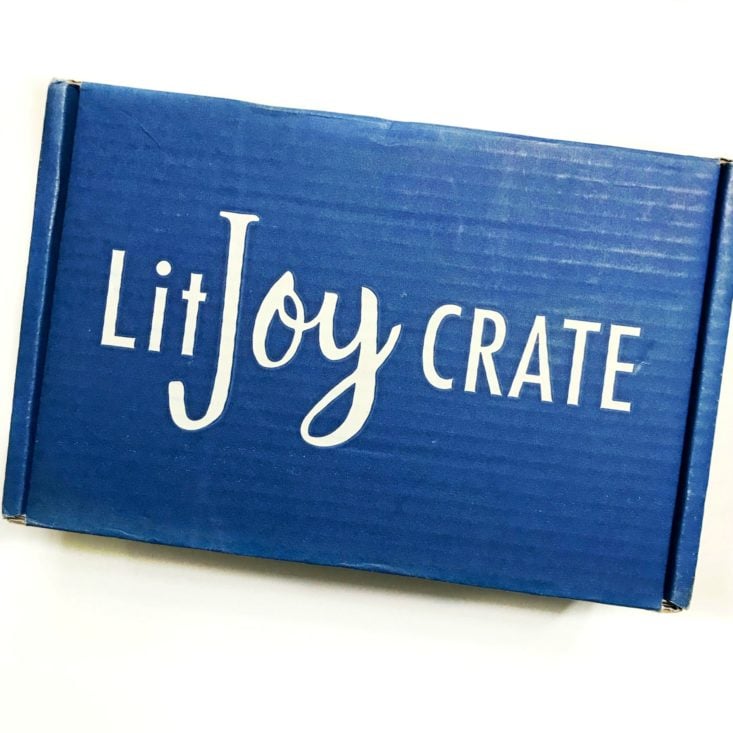 LitJoy Crate is a monthly book subscription box for babies, kids, and teens. They send books and interesting book related items. They have crates for 3-7 (picture books), and 14+ (young adult). 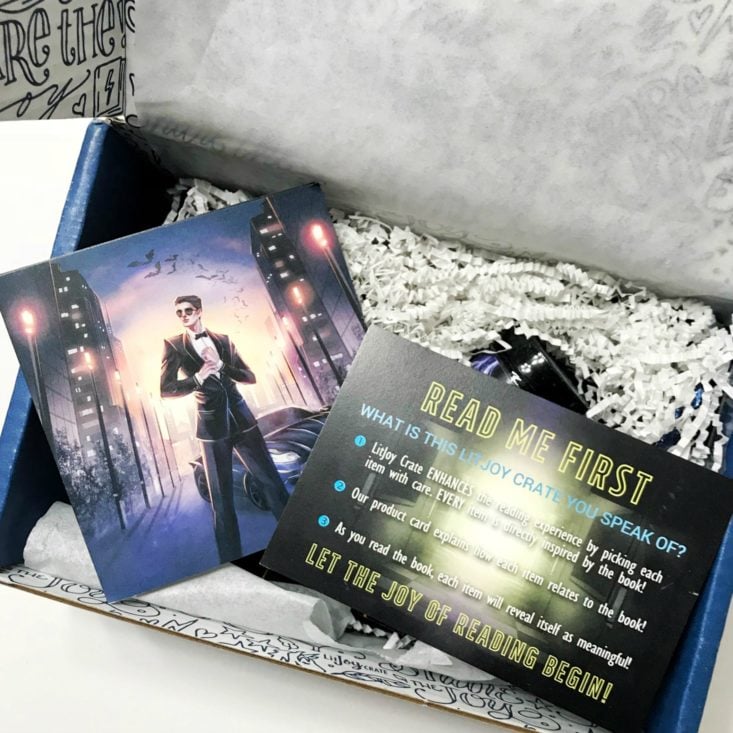 This box was sent to us at no cost to review. (Check out the review process post to learn more about how we review boxes.) COUPON: Use code MSA5 to save $5 off your first box!

The Products: Depending on your subscription type, you will receive newly released board books (2), picture books (1), or young adult books (1), plus 2-4 assorted book-related items.

LitJoy YA Crate Review for January 2018 There’s an informational pamphlet for the box that lists all its contents along with descriptions and plot-related explanations for their inclusion. There’s also info about this month’s author and featured fan artist, as well. The book comes with some special extras from the author, including a note and signed inside cover. Before reading this book, the only Batman-related content I had delved into to was The Dark Knight. I wouldn’t deem myself a huge comic book fan, but I loved The Dark Knight. So, when I saw mention of familiar characters and plot points (young Harvey Dent absentmindedly flipping a coin, for example!) I was giddy and immediately hooked. You can tell through Marie Lu’s detailed writing that she has a deep love for the entire Batman fandom and universe. There are certainly ho-hum aspects of the book that feel like they belong in a YA novel, such as Bruce Wayne’s romantic subplot with the villain, so the Gotham setting, tertiary characters, and coming-of-age storyline are where the real fun lies.

Before he was Batman, he was Bruce Wayne. A reckless boy willing to break the rules for a girl who may be his worst enemy.

The Nightwalkers are terrorizing Gotham City, and Bruce Wayne is next on their list. The city's elites are being taken out one by one as their mansions' security systems turn against them, trapping them like prey. Meanwhile, Bruce is about to become eighteen and inherit his family's fortune, not to mention the keys to Wayne Industries and all the tech gadgetry that he loves. But on the way home from his birthday party, he makes an impulsive choice and is sentenced to community service at Arkham Asylum, the infamous prison that holds the city's most nefarious criminals.

Madeleine Wallace is a brilliant killer . . . and Bruce's only hope. The most intriguing inmate in Arkham is Madeleine, a brilliant girl with ties to the Nightwalkers. A girl who will only speak to Bruce. She is the mystery he must unravel, but is he convincing her to divulge her secrets, or is he feeding her the information she needs to bring Gotham City to its knees?

In this second DC Icons book--following Leigh Bardugo's Wonder Woman: Warbringer--Bruce Wayne is proof that you don't need superpowers to be a super hero, but can he survive this game of tense intrigue, pulse-pounding action, and masterful deception? 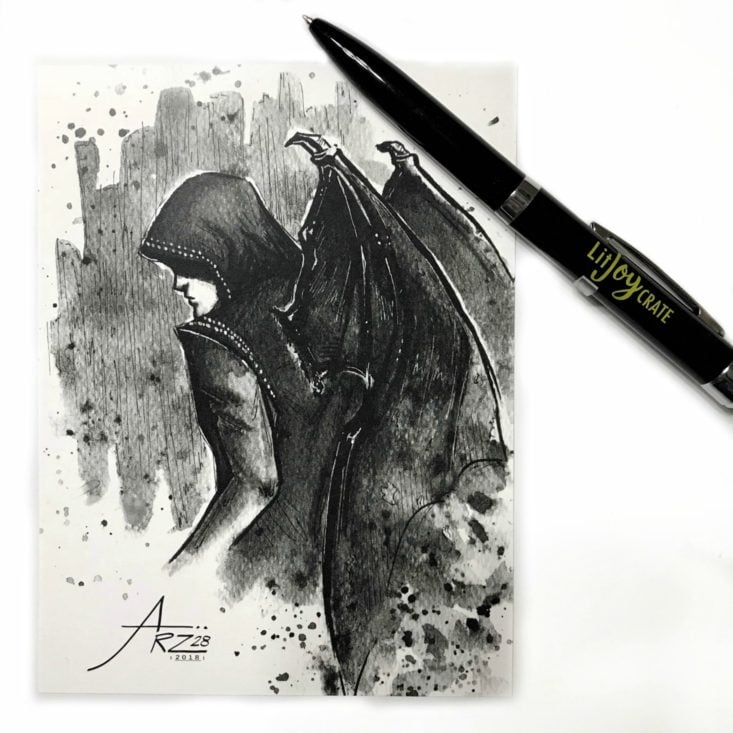 I love this print! 19-year-old Arrabelle (whose artist page and charming bio is featured on the back of the box’s brochure) crafted this moody, broody Bruce Wayne watercolor that’s sure to steal hearts. It’s printed on smooth, glossy cardstock and sets a tone of mystery and intrigue that complements the novel well.

And the pen—a gadget even Lucius Fox would gush about! This high-tech ballpoint pen gets a touch of heroic flair from its built-in bat symbol. With a push of the small silver button on its side, Batman’s iconic emblem can be illuminated against any surface in bright, blue-tinted light. The black pen itself is pretty standard (i.e. doesn’t offer the smooth, inky writing that I look for in roller pens!) but its fun flashlight feature certainly makes up for that. 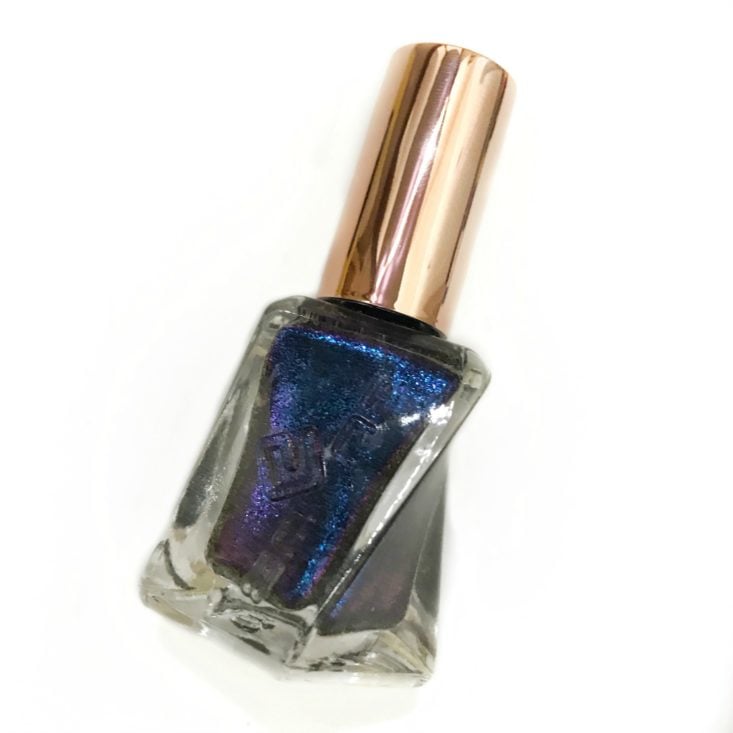 Upon opening the box, I was originally met with a clear plastic bag full of spilled nail polish—the bottle had unfortunately cracked during shipment. After contacting LitJoy, however, they sent a replacement nail polish free of charge! The reshipment arrived damage-free thanks to bubble wrap and LitJoy’s stellar customer service. This nail polish features a slightly sparkly, iridescent hue. Its shades of black, dark purple, and indigo all showed up and looked awesome on my nails! Another candle! Hip hip! This small jar candle from A Court of Candles is the same size as last month’s raspberry cordial scent. The brochure lists bergamot, jasmine, patchouli, drakkar noir, and a “hint of darkness” as its ingredients, but to be honest…it smells mainly like a nondescript bar of soap. I do love its black-and-white colors, however! The contrast of the two wax layers offers a great light vs. dark, good vs. evil symbolism that I’m all about. Burn this baby while reading for ultimate effect. You may notice in the photograph that there’s a touch of purple splattered on the lower right-hand corner of this pouch. That’s a small nail polish casualty—the actual pouch stars only bright yellow, black, and midnight-blue hues! This makes for a fantastic makeup pouch. It has a nice woven texture and a stunning gold zipper that looks like it’d hold up with continued use. Its emblazoned quote stems from this particularly thrilling passage in the book:

“A rush of adrenaline flooded into Bruce’s veins, and the world around him seemed to sharpen. It reminded him of being trapped as a child in the caves underneath the manor, the water and blackness and creatures that seemed to close in from all sides.

He shut his eyes for an instant. This silver necklace is inspired by Madeleine Wallace: the novels endlessly intelligent, enigmatic villain that keeps Bruce—and readers!—on their toes. Madeline has a knack for origami, twisting and transforming ordinary items into dangerous new shapes. (In the novel, she folds a napkin into a scorpion, but this crane is a perfect symbolic touch.) I really like the lightness of this gold necklace. It's delicate, yet sharp, invoking the same vulnerability-meets-machismo of Bruce Wayne himself. 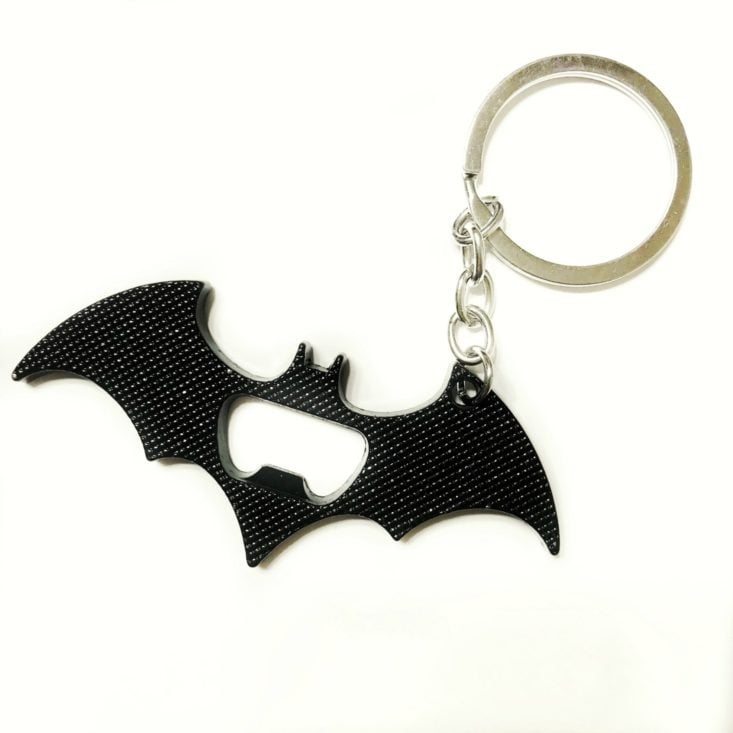 Batman Can Opener Keychain
Just as Bruce Wayne stays prepped for any undertaking, you’ll be prepared for any beverage with this bat symbol keychain. Inspired by the sleek design of Bruce’s speedy Aston Martin, this black bottle opener is my favorite item in the box, apart from the book! It has a great corrugated texture that’s satisfying to run your finger over. I’m adding this to my key ring immediately!

The Verdict: I was blown away by how much this month's LitJoy YA Crate hooked me, an admittedly surface-level comic book fan, on Batman! There’s so much to love about Nightwalker’s characters and storyline. In classic YA fashion, some of the writing is a bit dramatic or heavy-handed, but honestly, who can resist the exciting coming-of-age narrative of Batman becoming Batman? The boxes contents are thoughtfully curated and provide something for every type of fan. Whether you’re an under-the-radar Batman enthusiast like me or prefer to wear your love for Bruce Wayne proudly on your sleeve, you’ll find something to love in this month’s LitJoy Crate.

Can you still get this box if you sign up today? No, though they do sometimes sell past crates on their site shop. Order by the 20th of the month to get that month’s crate!

Value Breakdown: The box cost me $38.98 after shipping. The book cost $18.99 at retail, meaning the remaining items have a total value of at least $19.99 (and an average cost of $1.99). Note that there is also some intangible value that comes from the author note and brochure—if you’re an avid reader, then that personal touch might be more valuable than some of the physical items in the box!

Check out all of our LitJoy Crate reviews and the Book Subscription Box Directory!

What do you think of the January LitJoy YA Crate?

Katie Martina
Catch Katie perpetually stressing about finding the time to see every movie on her growing to-watch list. Some of her favorite pastimes include car-belting to ABBA, continuing her search for the perfect skincare routine, and just makin' sure everyone's having a good time. Home decor lured her into the world of subscription boxes, but a recent foray into knitting has her giddy to find new crafts to explore!
Read More By Katie Martina >

Katie Martina
Read More By Katie Martina >
Catch Katie perpetually stressing about finding the time to see every movie on her growing to-watch list. Some of her favorite pastimes include car-belting to ABBA, continuing her search for the perfect skincare routine, and just makin' sure everyone's having a good time. Home decor lured her into the world of subscription boxes, but a recent foray into knitting has her giddy to find new crafts to explore!
Join the Conversation

The print is not of Batman. It is Rhysand from the ACOTAR series. It says it on the product card.

You have adorable nails.

Aw! Haha, thank you so much, Melissa! I’ve never loved my stubby lil’ circlular nailbeds, so this made my day.