GeekGear‘s World of Wizardry subscription is “a one of a kind mystery subscription box and a must have for any Magic fan! Each box will be personalized to your chosen House and will be filled with merchandise from your favorite wizarding world.” My Subscription Addiction paid for this box.(Check out the review process post to learn more about how we review boxes.)

This is a review of the World of Wizardry Wearable box, which is $27.01 USD + shipping, box. About World of Wizardry, a Harry Potter box by GeekGear

The Subscription Box: World of Wizardry

The Products: A variety of magical merchandise inspired by the Harry Potter universe In each box from Geek Gear, you will find a handy booklet listing all of the products inside. In addition to the products, you will also find a clue for an item in next month’s box and a “Subscriber Spotlight” featuring a community member. Now, they are even including prices! On the one hand, I have plenty of bookmarks now, but this exclusive 3D one is super cool. Again, I am more of a fold one page down or a small bookmark, but this would be great for a kid. I think I will gift this one to my nephew. This is a fun and unique item, definitely not something I have received from these before. This cookbook binder contains 3 recipes: Harry’s Birthday Cake, Golden Snitch Cake Pops, and Butterscotch Hot Chocolate. Basically, it’s the makings for the perfect Harry Potter inspired party! This Gryffindor t-shirt featuring the sword Godric Gryffindor is such a cool take on house pride. All of the house t-shirts have images of the Horcruxes from each house/house founder on them. The graphic is super cool and I am glad the t-shirt is black for once! It doesn’t really feel like this particular item fits in with the rest of the box because Bowtruckles’ play a prominent role in Fantastic Beasts and Where to Find Them, not necessarily in Harry Potter….though I do believe they are mentioned. Besides that small fact, I love the style of these prints! 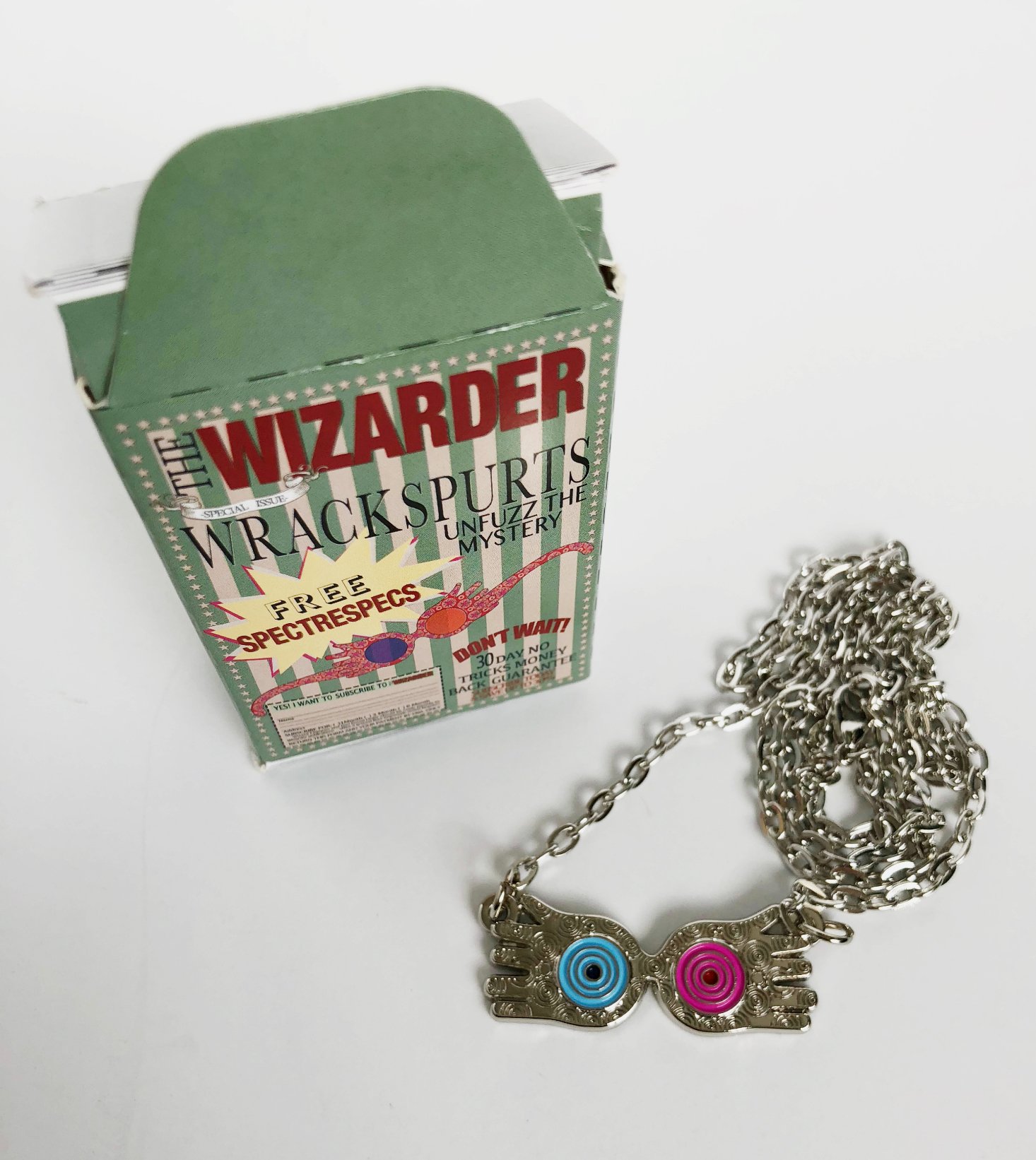 This heavy duty silver necklace featuring Luna Lovegood’s famous Spectrespecs is unique and super cute. It appears to be an 18-inch chain so it’s not too short or long. The chain is sturdy and the pendant is well-made. Really cool piece!

Finally, one of the main character’s wands! While this is the fully intact version of Ron’s wand, it’s fun and super sturdy. Really, I imagine this is what the wand’s on the set of the movies would be made of. These are not going to break easily so cast spells to your heart’s content.

Verdict: While this is definitely one of the better boxes I have received from GeekGear, I am a little disappointed because I would have liked to have seen a Christmas inspired box since this is the December box. For anyone who is a fan, Christmas at Hogwarts is an extra magical and special time of year so that would have been nice to see reflected in this month’s box. That being said, I was still impressed with the selection in this month’s box anyway. The cookbook was a nice addition as well as Ron’s wand. Overall, a good value for the cost!

Can you still get this box if you sign up today? No, you will receive the January box. Monthly boxes ship between 21st and 24th each month.

Check out all of our World of Wizardry reviews and more fandom and geeky boxes in the Geek + Nerd Subscription Box Directory!

What did you think of this month’s World of Wizardry Box?

World of Wizardry by GeekGear

How do subscribers rate World of Wizardry by GeekGear?

Want more World of Wizardry by GeekGear? See our:

Never miss a post: get email alerts about World of Wizardry by GeekGear!

) to get the latest World of Wizardry by GeekGear spoilers, reviews, deals, and news delivered to your inbox.

Chelsey started her subscription obsession like many other women, Birchbox. That led her to more including Stitch Fix and Graze. Next, she is looking forward to exploring craft, lifestyle, and book boxes, too. review
HelloFresh Review – Everything You Need to Know About the Most Popular Meal Subscription Box
14 comments | June 9, 2021