Dispatch: On The Run by Breakout Games Review + Coupon – November 2017 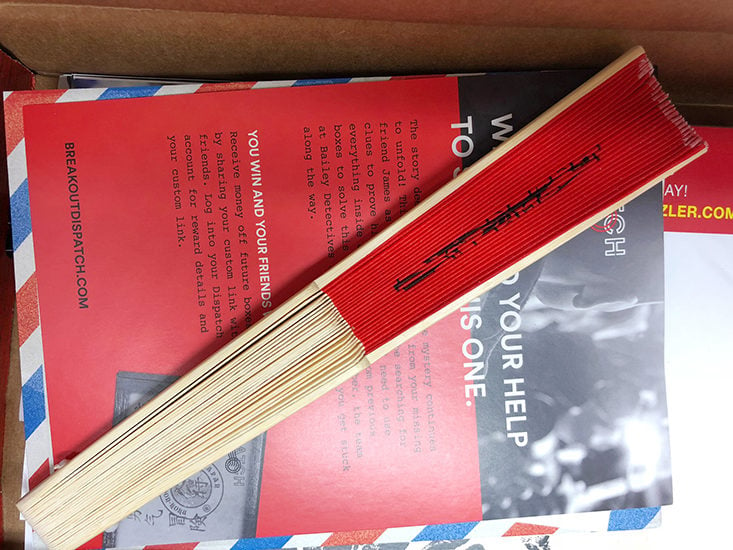 This card lists the contents of the box. It’s useful to make sure you have everything when the box arrives, but even more useful when you need to revisit past boxes to look for more clues. Ahh, another tabloid about the Van Kress family. Was the murder of Victoria Van Kress on her wedding night part of a curse? Or is there a more plausible – but perhaps more sinister – explanation? Lydia Van Kress is Victoria’s young cousin who mysteriously disappeared. Looks like her ghost has been seen throwing toothpaste tubes at people! That’s totally what I would do if I were a ghost. Here are a couple of newspaper clippings about a fire in a hotel in Tokyo. It was owned by the Van Kress family, but is there any connection with Victoria? This fan has a pattern of bamboo as well as some letters. I tried to make sense of them, but I couldn’t figure it out. This photo of a Van Kress family friend seems a little random. Where and when was it taken? This letter made me laugh: it looks like the fire was not covered by the owner’s insurance policy. This letter gives some information about help after the fire. There was a phone number at the end, and when I called, there was a recorded message that revealed some useful information! A handprint… Does it match any prints that I’ve seen before? Instructions for an origami crane, and lovely paper to go with it! Once the crane was folded, a number was revealed in the pattern underneath. This crossword puzzle was already filled out when I got it. The Sudoku puzzle was left undone, as well as this handwritten puzzle that looks like a URL. This envelope looks nothing like actual Japanese mail, but it’s still intriguing. I wonder what these letters and numbers mean! No really – I wasn’t able to figure out this part at all! This is the first box to leave me stumped, as there were several puzzles that I wasn’t able to solve this time. The note inside is from a witness to the fire. Here are some police reports that were printed in the newspaper. These glossy black chopsticks arrived in a paper wrapper with a plum blossom design.

The best part about Dispatch is that you can contact the Bailey Detective Co. to get help. I always write whether or not I need help, but this time I felt truly lost. Here’s what I wrote in a moment of discouragement:

Here’s the prompt response that I received:

Hmm, a hint in box #2 that might help? I went back to look through everything, but so far I haven’t had much luck.

Verdict: I wasn’t successful in solving this month’s mysteries, but I still had fun trying. There was a lot of entertainment value in this box. As always, the quality of the printed materials was high, and I like the inclusion of phone numbers and websites that make the story feel more real. Last month’s box was about Mexico and this month’s box was about Japan, so I’m wondering where the next box will take me. With the holidays coming up, I think this would be a fantastic gift for someone who’s difficult to shop for and seems to have everything.

I believe all new subscribers receive the first box so that the boxes can be opened in sequence, so you will not receive this exact box if you order now, but you will get it eventually.

What do you think of the third installment of Dispatch?

I think you use the Decoder key from Box 2 to unscramble the letters on the fan/chopsticks.

Ps. The “I hope you’ve read all my favorite mystery novels” is talking about Sherlock Holmes novels. The abbreviations are referring to the title of the book and the numbers are Paragraph, Sentence, and Word.