Awesome Pack is brand new subscription box that focuses on board games and other family fun activities. They offer a Family Pack if you need items that would work for young and older kids, or a Big Kid Pack for older kids and adults. (This review is of the Big Kid Pack).

They also offer customization and allow you to let them know what board games you already have so you don’t get repeats. This box was sent to us for review purposes. (Check out the review process postto learn more about how we review boxes). 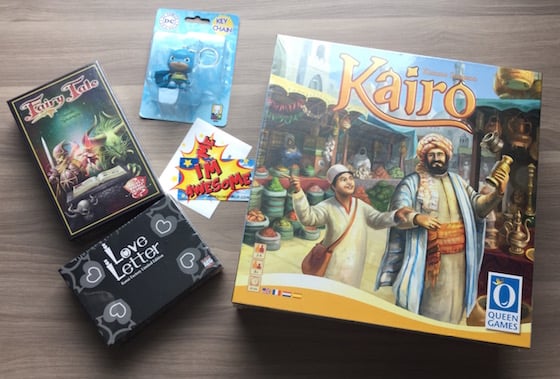 The Products: A board game in every box, plus other toys and activities (customized to your family).

Check out all of my Awesome Pack reviews! Each box comes with a letter detailing the items included for your family. Here is the game description from Amazon:

A game by Kimmo Sorsamo for 2-4 players aged 8 and up. The bazaar in Cairo is bustling already early in the morning. Carpets, precious oils and exquisite spice are waiting for their customers. But only a large booth will attract their attention. Being traders, 2 to 4 players expand their market stalls to lure rich clientele. Players balance expanding their sites against drawing customers in -- bigger shops give you more victory points, but only when customers enter. Resources must be gathered, but each turn spent drawing is a turn the other players are building. Sometimes a market barker will be of good help, because the competitors are not idle and the customers don't like to walk long distances.

This game looks interesting and will probably take a few times playing for me to get into the strategy of the game. (This blog did an This blog did an in depth breakdown/review of the game if you're interested in learning more about game play). Players use card drafting and simultaneous action selection to score points while interfering with other players' ability to do so. The game consists of four rounds. In each of them, players are dealt five cards. They simultaneously select one each and pass the remainder, repeating until done. Then, they start playing cards simultaneously, playing three and discarding two. When the cards are revealed after each selection, card abilities turn other cards face-up or face-down. At the end of the four rounds there are 12 cards in front of each player. The players each score based on their face-up cards.

Once upon a time, there was a kingdom in which lived a beautiful princess. She was a sweet soul, kind to all and was thus loved by the whole of the kingdom. Several young men had fallen helplessly in love with the princess, but unable to enter the castle, all they could do was send her letters of their affection. However, to their dismay, they found that letters from just anyone would not reach the princess. So the young would-be suitors set themselves on finding allies among the castle's servants, so that they might deliver their letter to the princess personally.

Love Letter has become a worldwide hit with its simple yet deep gameplay. With only 16 cards, it contains hours of fun for everyone as you attempt to win the heart of the beautiful princess, while preventing your challengers from doing the same!

Love Letter Kanai Factory Edition is based on the same rules and cards as the Love Letter Tempest Edition but features the charming art and graphics from the original game first published in Japan.

These are both card games and seem easy enough for anyone to play. I'm especially interested in the Love Letter game as it only has 16 cards and gets amazing reviews on Amazon. We received a Batman item in the January Awesome Pack as well (no complaints from my husband), but this one is much cuter!

Verdict: This box has a value of about $81. I think 3 games and a toy is a good deal for the $45 cost, and Awesome Pack sends some really interesting games that I haven't heard of before. We had a game night with some friends last month to play some of our Awesome Pack games, and now I'm thinking we'll need to make it a monthly occurrence!

What do you think of Awesome Pack?

Will you be reviewing March’s box? I’d love to know what was included and not sure where else to look…

Yep – just got it in the mail a few minutes ago! I should be able to get the review up soonish 🙂

We have the family pack. Last month was our first. My first impression was “pfffffffftttttttttt…..I could do so much better-and I would get games my kids actually liked.” I have 3 children Preschool, Pre-K, K. Since then-my children have gone insane over both games and every single thing in the box. One of them is this vampire game involving magnets-it’s so fun. I added up the things in the box in my amazon cart-and the total was more than we paid. And, apparently I’m not expert when it comes to what my children like. So, we’re subscribers for now. 🙂

While this month’s did not have as much content as last month, I felt that these were some very high quality games. My keychain was a Harely Quinn who immediately went onto my keys.

I thought this was a great box too, but my Kairo game is missing some pieces. At first, I thought it was just the rule book. After finding an electronic copy on the Queen Games website, I found that I was also missing the wooden customer pieces and scoring markers. I contacted Awsome Pack and they were very quick to respond (within 20 minutes) with an apology. They said that they will contact the company and either send me the missing pieces or a new Kairo game. I hope it doesn’t take too long. I really want to play.

It’s funny you got Love Letter because we just opened and played our copy for the first time tonight. It’s easy to learn and a lot of fun! 🙂

I really like the idea of this subscription, but we already have a lot of games. It’s really tempting because they’ve picked out some really interesting ones we don’t have yet. I think I’d like it more if maybe it was a quarterly box, instead of monthly. It’s great for someone just building their collection, though! 🙂

So far I have been really impressed with this box. I haven’t had a chance yet to play the games i received but I thought the selection was good. My box was completely different games than yours and I like how they offer the personalization options based on your family’s ages and tastes.

I’ve read reviews of this sub geared towards younger children and like it. We love playing board games. I keep going back and forth on it. It’s the pricepoint. I don’t normally spend that much money on games every month. I wish they had an every other month option. I would find that appealing especially if it fell on months that Sudsy doesn’t bill.

I’m thinking you can skip months so you could email them and arrange a schedule that works for you.