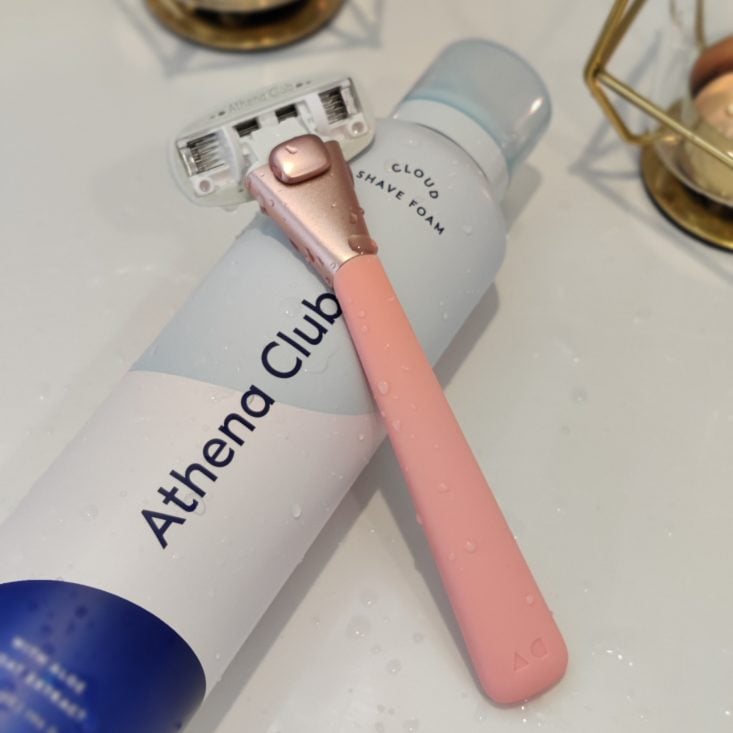 You know what’s worse than not being able to find anything to wear? Having the perfect outfit, but having razor burn or shaving nicks screwing it all up. Those tiny, irritating things that manage to happen in the worst possible spots, like your underwear line or right on your ankle bone where your shoes rub. And why do they take forever to stop bleeding!? Well, since I discovered Athena Club, those shaving mishaps are a thing of the past.

USE CODE MSA TO GET THE RAZOR KIT FOR $5

Before I started shaving with the Athena Club razor, I had to sport my kids’ Baby Yoda bandaids out on more than one occasion. And not that I have anything against the little green dude, but I decided it was time to ditch my old razor and treat myself to something that actually works.

Just looking at that list annoys me. These are the five most complained about shaving issues and something I bet most of us have had to deal with at one point or another. And while shaving is a part of our lives, the problems that commonly come with it certainly don’t have to be. I’ve tried quite a few razors. Everything from the super cheap ones you get for free in hotel rooms (I do not recommend these!) to the priciest ones in the beauty aisle. I had a few that were halfway decent, but I could never find one that avoided most skin problems until I tried Athena Club. My biggest issue has always been those tiny red bumps in the bikini area and the little nicks you get around your knee. Neither of these are pretty to look at. I’ve even had to forgo the pool occasionally because my bikini area was so bad.

On top of that, my skin becomes so dry every time I shave. I already live in a very dry environment, so I don’t need anything helping to make it worse.

Try THE RAZOR KIT FOR $5 with code MSA

So, why do we all experience at least a couple of these common shaving problems? While it’s not always the case, the majority of the time it's going to be because our razor just downright sucks. There are too many on the market that have dull blades, not enough blades, no additional moisturizing features, or even poorly produced shaving cream. By finding the right razor for you, it’s surprising how many of these annoying shaving issues can be fixed. The right razor for me happened to come from Athena Club. And I’ll admit when I first heard about a subscription razor I thought it was a bit silly. A razor was supposed to be something that you could easily find in the drug store and not have delivered each month. That just seemed over the top. But then it hit me. Who cares how you get the product, right? As long as it works, that should be all that matters. And man did this razor work.

I received the Athena Club razor as well as the Cloud shaving foam, and I’m serious ya’ll…I’m never going back to those tiny torture devices they call razors in the store. This thing was soft on my leg and easily glided in any direction. The foam really was cloud-like and puffed up magically once I smoothed it on. It almost felt like a protective barrier between the razor and my body. The Athena razor also had a water-activated moisturizing strip near the blades that released a gel-like substance which helped the razor move freely and moisturize my skin.

The best part? I didn’t have a single bout of razor burn, tiny red bumps on my bikini line or a single knick anywhere on my body. Will it always be like that? Well, I’ve got two kids who scream my name while I’m showering, so I’m sure eventually I’ll be startled enough to nick myself. But that’s a problem for me to solve. Having a razor that I can actually depend on, is just downright amazing. I’m pretty sure Athena Club is the future of shaving….now if they could just invent a machine that did it for me!

Get THE RAZOR KIT FOR $5 with code MSA