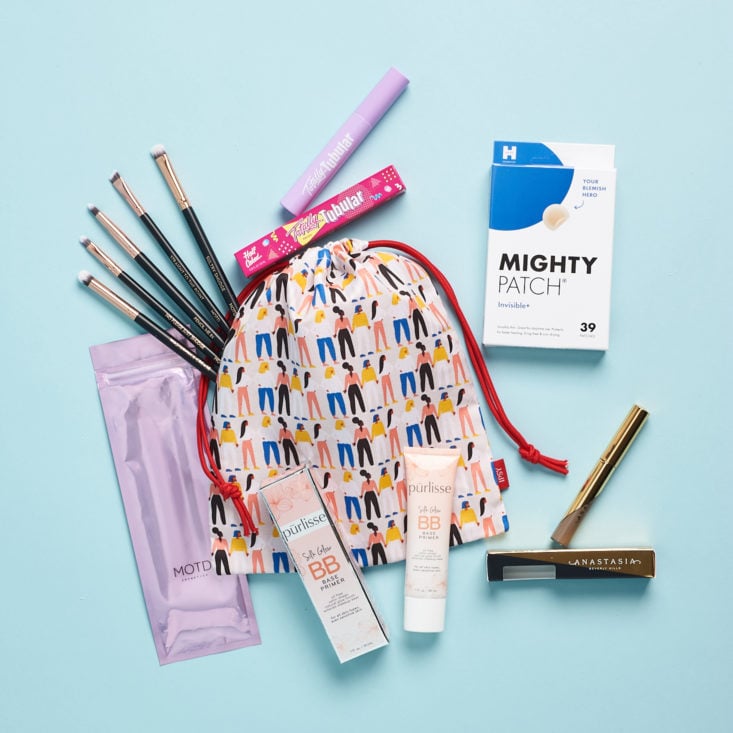 According to Ipsy, these "exciting brands are here to refresh your routine and help your beauty skills bloom."

Here's what can you expect:

If you are new to Ipsy, it is a $12 a month beauty and makeup subscription box. Ipsy Glam Bag Plus is $25 a month.

Check out all of our Ipsy reviews to see what’s been in past boxes and our Ipsy spoilers to see what's coming up in future boxes!

And read up with our Ipsy Glam Bag Plus reviews to see what you can expect each month.

IPSY Glam Bag is one of the most popular and affordable subscriptions around, and our readers have selected it as one of the top beauty boxes for the last 5 years running! IPSY Glam Bag connects members with five makeup, skincare, hair care, and other beauty samples each month, plus a cute makeup... read more.

I’m just really happy to see Herbivore in Ipsy. I love their products. Just hoping at some point they are available as add-ons. I don’t know if they make sample or deluxe sized products.

Very misleading, 1/2 of these brands are from glam bag x and most people didn’t have a opportunity to receive these brands

When Ipsy forms a relationship with a brand, we tend to see multiple products over time in various tiers, add-ons and in shopper. It isn’t typically just one product and done. I get the impression that the majority that wanted GBX got in on May’s box as well- haven’t seen any complaints of people on the waitlist who didn’t get it yet. So if people want access to the brands in GBX, they most likely could get it if they signed up before billing. This is just one month we’re looking at. And yeah, if you want access to top tier brands and sought after products, you typically have to shell out more money to get it- it’s the way of the world.

Ipsy’s so slow lately with shipping and spoilers. I still haven’t received my bag or add-ons from April, but I received the item I ordered during May choice last week. Makes no sense anymore.

Same, I still haven’t received my April bag, supposedly it will be here on the 8th. Very disappointing.
Totally understand shipping times vary because of covid, but mine didn’t even SHIP until April 30th. You would think they would get it together a bit, Covid has been going on for over a year.

Interesting… and also straight up lies from Ipsy??? I got Kopari as an add-on last month, so that’s not “new” this month.

I also know Rodial has been in Ipsy before because it’s a sub box staple, so I did a Google search, & sure enough, they’ve sent out Rodial Stem Cell Cleansing Cream, Rodial Glamolash mascara, Rodial Glamobrow, Rodial Smokey Eye Pen, & Rodial Dragon’s Blood Hyaluronic Tonic (I’m pretty sure I actually received the last one in a glam bag years ago).

The *entire post* is IPSY’s instagram post. MSA gets their info from the brands/subscription companies or from trusted sources that get info from those places, I don’t get how that makes MSA “silly”. Could you expand on what you mean?

I didn’t write the post, so I can’t say what she meant. I can tell you what I perceive.

It seemed to me back when Liz was running this site that there were more exclusive spoilers and inside info here than there are now.

That could be because Liz had better connections. Or it could just be that the sub market is changing so much that the excitement has greatly diminished. Could that even be why Liz moved on?

It’s like which came first, the chicken or the egg? I don’t know who’s to blame here but subs have lost their luster in a lot of cases, which doesn’t look great for this site.

On another note, it does seem like a lot of cool subs are gone or watered down, and that is definitely not MSA’s fault. The Golden Age has ended.

Nothing new to see here.

FYI, Ipsy is back at it again featuring DLS products. Hopefully all of you can email their customer service so they finally stop using her brands and maybe do some due diligence into each product they include.

DLS’s new brands are Basic Beauty & Saint Luxe. Devious part is she’s using another persons name as a front on these websites (Nicole, just Nicole no last name) behind this company and claiming it’s black owned when public records show she owns this company as well as the import records and bill of lading show she’s the signee for these cosmetics for these two brands. So unethical.

Wow.. using BLM in this way. Girl’s really got the nerve. That and the past history of fake brand attempts should make a pretty good lawsuit.

Sadly it’s not illegal to buy products and rebrand them. What it is though is highly unethical. By now she might have 13 different brands that she sells primarily to sub boxes. Boxes love them because they get them for super cheap and the MSRP is high so it bumps up the box price.

I’m guessing the liner duo was so cheap since Boxycharm was selling the Saint Luxe liners (not sure the same shades?) like a year ago – so it’s probably cheap, almost expired overstock.

But the Saint Luxe website is really selling the “female, black owned” angle hard, sometimes in ALL-CAPS. It’s unfortunate because the scams make it harder for people with legit businesses they’ve worked hard to establish to get any traction.

Also, ipsy’s website says “BASIC BEAUTY is a Black-owned indie brand”. Could it be a different ‘Basic beauty’?

No, it’s part of the DLS brands. DeFalco put a pic of a woman named Nicole (whose African American) and she apparently owns or is the CEO of the brand. BUT, public records show these 2 companies are owned by DLS cosmetics. And the import records and bill of lading show DLS is importing for Basic Beauty and Saint Luxe. Super shady. I’m assuming this woman is just the face of the brand but DeFalco owns it. She probably pays her to keep her mouth shut since everyone has sussed her game with all her other brands. She just keeps adding more brands to sell to sub box companies. And how disgusting to use the BLM for her gain.

Gosh, this is infuriating! Got the basic beauty primer in my reg bag this month… ugh! and I didn’t know about Saint Luxe either. This is indeed ridiculous and unethical. Didn’t Ipsy just announce they’re blocking ‘bad’ ingredients, now they’re back to shady brands/suppliers, how to trust them? Anyways, thank you for letting us know.

I was really hoping for that pink Hipdot blush, but I didn’t see anyone mention it in their bag.

‘Here’s what can you expect…”

I didn’t get anything on that list, so yah…just some crazy tiny skincare samples.

Man, this aged about as well as milk after seeing the GBX comments section…

I’m getting the ONA rejuvenating serum in GBP this month. And Shea Brand was one of my options in Choice.

The majority of these were in the X box.

Right? Thought a lot of them looked familiar 🤔

I was thinking the same. They are not so much coming as they are here. MSA is just silly now

The *entire post* is IPSY’s instagram post. MSA gets their info from the brands/subscription companies or from trusted sources that get info from those places, I don’t get how that makes MSA “silly”. Could you expand on what you mean?

Well, Ipsy just posted this exact info to their IG stories a couple of hours before this post, and I suspect that this post is based on Ipsy’s IG stories… so in this case the timeliness problem seems to have originated with Ipsy.