Athena Club is a razor subscription that’s also a one-stop-shop for personal care essentials, like shaving cream, body wash, body lotion, deodorant, multivitamins and period products. The brand promises a higher standard for self-care by making better quality products that are more convenient, less complicated, and fairly priced. The ingredients in all Athena Club products are meticulously researched and ethically sourced, with no harsh chemicals, dyes, or additives. With customizable subscription plans so that you never run out, say goodbye to drugstore runs and hello to Athena Club.

The Athena Club razor has been designed, tested, and retested for how people actually shave. Which is often in a hurry, not in their showers, in hard to reach spots, in weird positions, and not just their legs. Meet the Razor Kit for the shavers among us––however, wherever, whyever you shave. The innovative, curve-loving, body-knowing razor features five spaced-out blades and a moisturizing serum activated by water for the superest, smoothest, closest shave.

Athena Club is our pick for the best razor subscription overall.

Read reviews further down the page, too, for more personal experiences.

The Razor Kit is $9 with free shipping. Blade refill subscriptions start at $2.25 per blade and are delivered monthly, every two months, or quarterly.

What Else You Should Know About Athena Club Razor Kit

In a world filled with shaving subscriptions, Athena Club stands out by its design and versatility. Not only is it super comfortable to use in the shower, it’s great for all parts of your body. The head of the razor is designed to move with you, so whether you’re standing or sitting when shaving, you’ll be nick-free. It’s also sensitive enough that you can use it on your face and the nether regions.

The brand also boasts clean ingredients and has plenty of other products that will complement your shave: a lotion, a shaving cream, a body wash – and even period care and daily multivitamins.

Is Athena Club Razor Kit Worth It?

Athena Club is one of the most popular brands among shaving subscriptions and honestly, the prices and quality can’t be beat. They also have a wide variety of colors, so there’s something out there for everyone.

Athena Club VS Billie: Both brands offer starter kits with a handle, two five-blade cartridges, and a magnetic holder. These kits are similar in price with Billie costing $10 and Athena Club charging $9 for the shaving kit. In terms of replacement cartridges, Athena Club starts at $2.25 per blade sent and they are delivered either every month, two months, or quarterly. You can choose whether to receive 4, 8 or 12 blades per shipment. Alternatively, Billie will send you four cartridges for $10 whenever you need them. The look of both brands is also quite different as Athena Club tends to be more gender-neutral while Billie targets those who identify as female.

Athena Club VS Flamingo: For $9, Flamingo offers a razor without a second cartridge or holder. However, it offers a Razor and Refills set that features a handle, five 5-blade cartridges, a foaming shave gel and shower hook for $20. Similarly to Athena Club, Flamingo offers cartridge replacements for $9 for a four pack. Flamingo is available offline as well at Target, Walgreens, CVS, and Costco, as well as a handful of grocery stores.

Athena Club VS Venus: More traditionally a drug store brand, the Venus razor has recently gotten a makeover to fit the modern woman. The Venus starter kit includes one 5-blade cartridge, one handle, a travel-size shave gel and a shower hook for just $7. However, refills are more expensive at $18 for a 4-pack.

Athena Club VS Dollar Shave Club: Dollar Shave Club offers a starter kit for $5 with small samples of prep-scrub, shaving cream, and face lotion that you could purchase later in full-sizes at greater cost, compared to Athena's starter kit for $9 that comes with a handy magnetic razor holder. After that, though, DSC sends by default an 8 pack of razor blade cartridges for $20, whereas Athena sends a four pack for $9 - ultimately saving you a couple dollars a month. The Athena razors emphasize the water-activated serum for smooth shaving as well compared to the number of blades. I have to admit I’ve tried a lot of razor subscriptions recently. As someone who had plenty of skin irritations as a kid and who just seemed to have overall bad luck with anything I tried, I aim to find the best products out there. But who wants to come out of the shower after […] 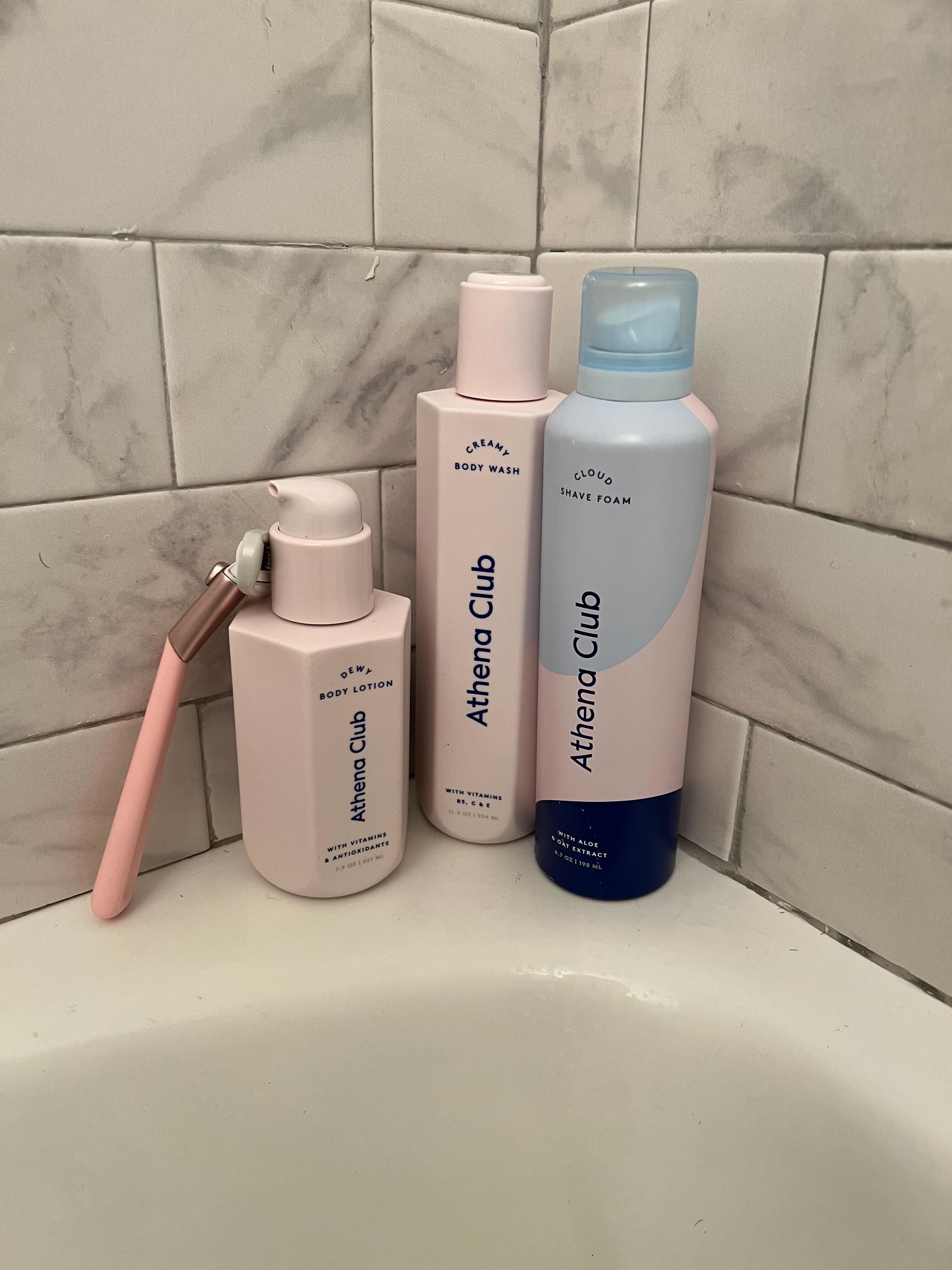 Athena Club vs. Venus: Which Razor is Right for You?

I’ll admit, I’ve never been great at shaving. I didn’t have any older sisters to learn from, and my mom wasn’t the best teacher. It took me years to master using shaving cream, and I often would use my Schick Intuition razor, because it had a built-in soap block. I would constantly nick myself shaving […] Athena Club vs Billie: The Darlings of the Razor Industry Go Leg to Leg

A side-by-side comparison of Athena Club and Billie razors – we find out which one’s better.

I have to admit I’ve tried a lot of razor subscriptions recently. As someone who had plenty of skin irritations as a kid and who just seemed to have overall bad luck with anything I tried, I aim to find the best products out there. But who wants to come out of the shower after […]

Vs
Athena Club vs. Venus: Which Razor is Right for You?

I’ll admit, I’ve never been great at shaving. I didn’t have any older sisters to learn from, and my mom wasn’t the best teacher. It took me years to master using shaving cream, and I often would use my Schick Intuition razor, because it had a built-in soap block. I would constantly nick myself shaving […]

Vs
Athena Club vs Billie: The Darlings of the Razor Industry Go Leg to Leg

A side-by-side comparison of Athena Club and Billie razors – we find out which one’s better.

Write A Review
Melanie
9 reviews
"So Smooth"
Nov 18, 2021
Great razor- smooth, close shave, NO NICKS OR CUTS. No irritation. Best razor I’ve ever used plus the added convenience of being delivered straight to my door.
Taija-Rae
1st Time Poster!
"Feeling luxurious"
Nov 5, 2021
I love love love this razor! I've had it for about a month now use it so often, even when I don't really need to! I just love how close of a shave this gives me. I also have the creamy body wash and that smells and feels amazing! I wish I could get the shave cream but it doesn't ship to Hawaii :( The lubrication on the razor and the cream body wash works great, so I'm not missing out on too much. I also just bought a kit for my teenage daughter, and she loves them. The colors are so beautiful as well!! Thanks Athena Club!
Paige
9 reviews
"Best razor ever!"
Oct 30, 2021
I bought my first Athena razor about a year ago. Then I introduced my adult daughter to Athena. Then I bought my second Athena razor for my gym bag. You CANNOT beat the price nor quality! Don’t waste your money on the overpriced mass marketed brands.
Melissa
9 reviews
"Great razor!"
Oct 21, 2021
I ordered the light blue razor kit. The razor is absolutely beautiful and heavy duty. It is a great shave. I also love the hanger for in the shower. It's magnetic. I also ordered a lilac razor kit and can't wait to get it.
Jennifer
9 reviews
"Love it!"
Oct 18, 2021
I love that the handle is magnetic, it makes putting it back up so easy. The blades come with a gel around them which help to glide the razor easily. Most of the time I don’t even use shaving gel and it makes shaving your knees easier!
Monique
9 reviews
"Great service"
Oct 11, 2021
I ordered the mint razor and didn't receive any notification of it shipping. When I contacted customer service, I was told that color was on back order. But they offered to replace my order with a different color and got it shipped right away. Razor blade is sharp like it should be. Overall, I'm very happy with Athena Club.
Daniel
9 reviews
"Order it!"
Oct 5, 2021
So far this is the best razor I’ve purchased in many many years. I used intuition for the last year and it is trash compared to this razor! SUPER close shave. I think the price is a bargain and I’m very happy I stumbled across Athena! The magnetic holder for the shower is a big bonus for me. Don’t second guess yourself: BUY THIS NOW!
Anonymous
6 reviews
"New User"
Oct 12, 2021
Just received my razor.. This is a very nice women's razor - comfortable to hold & provides a close shave. The magnetic holder is wonderful. I would give a 5 star rating however, the blade keeps falling off the handle while shaving - a bit of an inconvenience.
Wendi
10 reviews
"Pretty in Pink"
Sep 8, 2021
The Razor is a bit heavier than I had thought. I hope the blades last as long as expected. But overall I'm pleased with purchase!
Rebecca
3 reviews
"Razor Bumps"
Feb 4, 2022
I purchased the Athena Club Razor in their limited edition color, Lilac. The razor color is beautiful and it felt nice and heavy. But that's about where the pros end for me. I used the razor for several months. I changed the razor head appropriately but I started noticing not only did the razor feel like I was dry shaving even with the shaving cream, but my skin broke out in razor bumps all over. The ingrown hairs came back with a vengeance! I kept thinking maybe my skin wasn't exfoliated enough. I cleansed and exfoliated my skin but the bumps kept happening after every shave. Finally, I switched to a Schick razor and boom...my legs looked and felt better already. Days out from the Schick shave and I don't see any razor bumps. The idea was great but the execution was poor. The magnet also didn't stay on my shower wall that long. Maybe better adhesive strips?

enter your email for cool stuff

At My Subscription Addiction, we believe in better living through subscriptions. It's our goal to help you discover new and exciting products, serving as a trusted partner in your online shopping experience. Our team is dedicated to providing honest and thorough product reviews, but also empowering the community to learn from each other through trusted reviews of your own. Read our editorial and community guidelines to learn more.